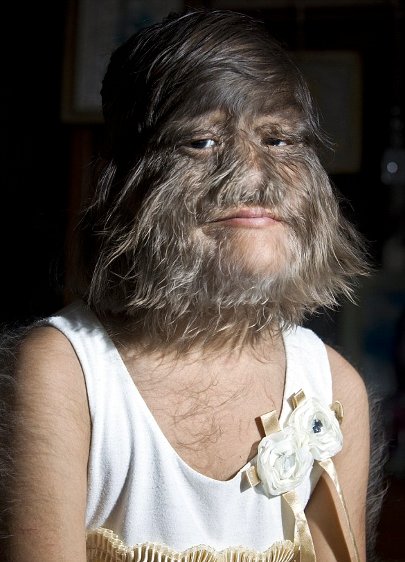 No, this isn’t a scene from a Teen Wolf

This is 11 year old Supatra Sasuphan, a Thai girl who lives in Bangkok. Supatra has a rare affliction called Ambras Syndrome, which causes an overgrowth of hair over her face, arms, and torso. Laser treatment has unfortunately failed to stop the growth of Supatra’s hair. Because of her condition, she used to be called unflattering names like “wolf girl” and “monkey face.”

Fortunately, Supatra Sasuphan has gradually been accepted by her community. She still gets stares, but nobody calls her names anymore. The “wolf girl” is, in fact, extremely popular and is happy to have achieved a Guinness World Record for world’s hairiest girl.

I’m very happy to be in the Guinness World Records! A lot of people have to do a lot to get in. All I did was answer a few questions and then they gave it to me. I’m very used to this condition. I can’t feel the hair as it has always been like this. It does sometimes make it difficult to see when it gets long. I hope I will be cured one day.

Only about 50 people suffer from Ambras Syndrome worldwide. It is said to be caused by a faulty chromosome and has been around since the Middle Ages, where sufferers were called werewolves.

Ambras Syndrome is also known as Hypertrichosis. It has also been called, informally, “werewolf syndrome”. The first recorded case was a man named Petrus Gonzales, whose family portraits were discovered at Ambras castle in Austria, hence the name “Ambras Syndrome”. As you may have guessed, sideshow performers such as Julia Pastrana (“the bearded lady”) and Fedor Jeftichew (“Jo-Jo the Dog-Faced Boy”) suffered from Hypertrichosis.