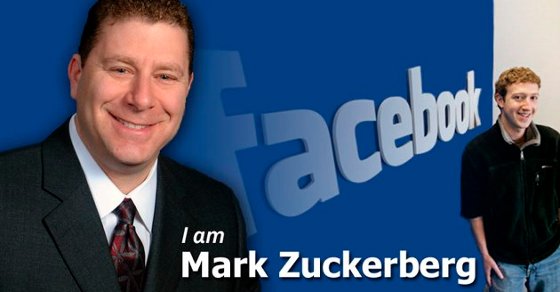 Mark Zuckerberg banned from Facebook? Yes, but he’s not the Mark Zuckerberg you think he is. No, this Mark Zuckerberg is a lawyer from Indianapolis, a guy who is actually a bigwig in consumer bankruptcy law – he won many awards and does national speaking tours. It’s just too damn bad that he shares the same name as Facebook’s founder.

“I was originally denied an account with Facebook two years ago because of my name, and I had to send them copies of my driver’s license, birth certificate, and Indianapolis Bar Association license just to get them to believe that I exist and to allow me to set up my page.”

Before his account was terminated, Z-the-lawyer was receiving friend requests in the hundreds from people thinking he was Mark Zuckerberg-the-founder of Facebook.

“I’ve gotten emails from people on Facebook, thanking me for finding their lost relatives because of Facebook…And then they would say, Can you lend me some money so I can go fly and meet them?”

Mark (lawyer guy) said it was impossible to get a hold of anybody at FB. News 8, the source of this story, didn’t make much headway either. Until just recently, when FB said they were in the process of re-activating the guy’s account.

This is such an Office Space