So the big controversy in the news this week is how Chicago rapper Common was invited to the Obama White House. Republicans and conservative commentators, Fox News anchors like Sean Hannity, and talk radio people like Glenn Beck are all up in arms, because Common

has a few verses in a few of his songs that are of a violent nature, anti-police, etc.

What they forgot was that Eazy-E, the late, controversial rapper from the gangster rap group NWA, was also invited to a Republican White House luncheon on March 18, 1991, when George H.W. Bush was president. 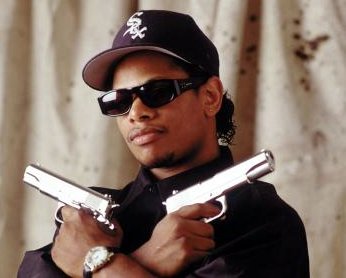 If you don’t know about Eazy-E

And yet, it didn’t stop then Republican Senate leader Bob Dole from inviting Eazy-E (aka Eric Wright) to attend an exclusive luncheon with the president and Senatorial Inner Circle.

Wright, 23, a self-professed ex-gangster and former drug dealer, received his invitation to the closed-door fund-raiser after he contributed $2,490 to the Republican Party at the urging of Sen. Phil Gramm (R-Texas).

The section of Common’s lyrics that people are mad about:

Use your mind and nine-power, get the government touch
Them boys chat-chat on how him pop gun
I got the black strap to make the cops run
They watching me, I’m watching them
Them ** boys got a lock of ** in them
My people on the block got a lot of pok in them
and when we roll together
we be rocking them to sleep

To close out, here’s Jon Stewart taking Fox News to task, where he points out that Common himself was featured on a Fox News spot, and they even wished Ice-T a Happy Birthday – Ice T, of course, responsible for the song Cop Killer with his metal band Body Count