An 82-year-old Indian yogi who goes by the name of Prahlad Jani claims to have spent 70 years without food or water. He’s being examined by scientists in a hospital in the city of Ahmedabad, India.

Jani said he left home when he was 7 to live as a wandering monk, and was blessed by a goddess a year later. He claims that there is a hole in his palate through which his head drops nectar, giving him nutrition and enabling him to live without food or water.“If his claims are verified, it will be a breakthrough in medical science,” said Dr. G. Ilavazhagan of India’s Defense Institute of Physiology and Allied Sciences in a news conference.

No shit, doc. That’s like, the understatement of the decade. 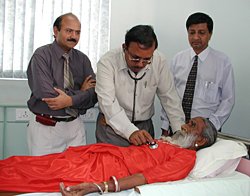 I officially pronounce this man ODD.

Apparently, a few years back, Jani was watched for 10 days. Doctors say that, without food and a very tiny amount of water, he only lost a little weight. They think his experiments with yoga have somehow biologically transformed him.

A new experiment brings Jani back to Sterling to be examined by 35 scientists for almost 3 weeks, using 2 video cameras, MRI scans, and blood tests, among other things. There’s both health and military applications to what Jani can apparently do. For example, what docs learn from him could help soldiers survive in hostile environments without sustenance for long periods of time.

That is, assuming Prahlad Jani isn’t full of crap. Which, by the way, they will probably be checking him for as well. 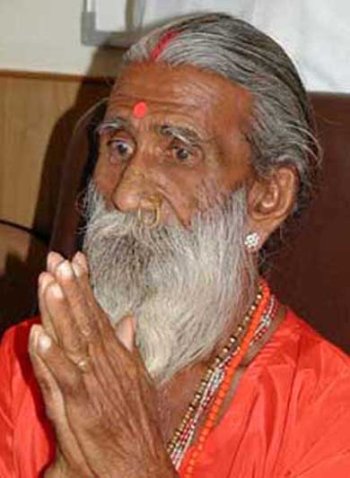 Thanks to Jeff H for the link!!