The critters of nature – animals and insects – have been known to create very interesting structures for themselves. If there’s one thing those nature shows tell us, it’s that earth’s creatures are very clever. And even though a spider can’t spin up a log cabin, it can still make fairly large and complex webs.

Recently, we came across a story about the largest beaver dam in the world – so large you can see it from space. So we wondered, what are the other “largest XX in the world” as built by creatures other than man.

To start with, we might as well look at the beaver. (TWSS)

Largest Beaver Dam In The World

The largest beaver dam in the world is located in Alberta, Canada. At 2,790 feet, it’s more than 2 times the length of the Hoover Dam. It is so big, it can be seen from space!!

The busy beavers make use of trees, mud, and stone to create a kind of moat (they’ll swim it to get away from predators trying to get to them). The dams have lodges that the beavers live in. Located in Wood Buffalo National Park in Alberta, was discovered 2 years ago by researcher Jean Thie, using satellite imagery and Google Earth.

Largest Spider Web In The World 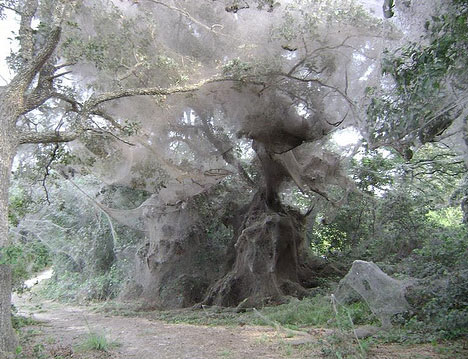 The world’s largest spider web was found in Tawakoni State Park, Texas, about 3 years ago. It was built by millions of small spiders, and at the time was 2 times the size of a football field.

The web covers a 590 foot stretch of trees and shrubs. It is a very rare occurrence for spiders to join together to create such a web. The world’s biggest ant hill may have been found in Holystone, Northumberland (United Kingdom). Built by the northorn wood ant, it has been measured at 5ft 6ins (167cm) tall and housing 500,000 insects – the ant equivalent of the Empire State Building. The hill was built from spruce and pine needls, and probably took many years to build.

Competition may come from this ant hill found in Africa: An ant-hill is just a pile of earth, sand, pine needles, or clay. The ants don’t live in the hill, they live underneath it, in what is called an ant colony. A colony is built and maintained by legions of worker ants.

Now, the greatest ant colony in the world is… well, it depends. For awhile it was the ant supercolony on Japan’s Ishikari coast (306 million workers, 1 million queens, 45,000 nests, 2.7km-squared size). Then a massive supercolony was found in Southern Europe – built by Argentine ants, it was over 3700 miles (6,000 km) in length, with millions of nests, billions of workers.

Get ready: Last year, it was discovered that the biggest Japanese, Californian and European Argentine ant supercolonies were in fact part of a single global “megacolony”. That means, they live in a global network just like us humans. Two ants from this “megacolony”, no matter how far apart they lived from one another, never fought each other. They were all part of the same group of “buddies.”

Related to the ant hills are the termite mounds. Funny that – in Africa and Australia, termite mounds are called “ant hills” but that’s technically incorrect. Termites are a different order than ants are. Termite nests are usually underground, but some are above ground. These above-ground nests can develop into termite mounds.

In tropical areas, termite mounds can become huge. In Africa some mounds reach 30 feet in height. 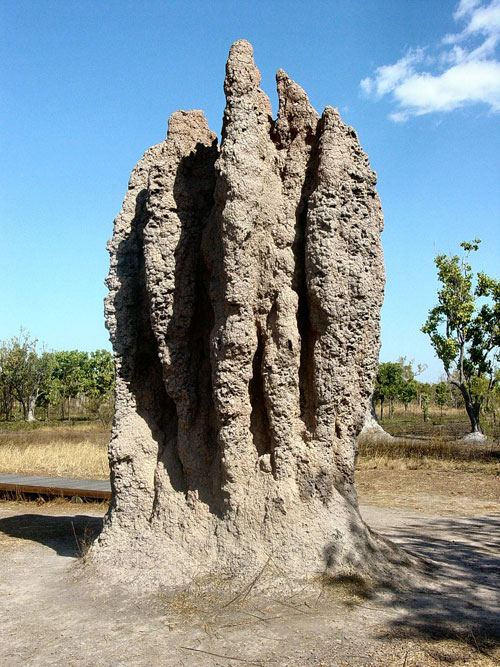 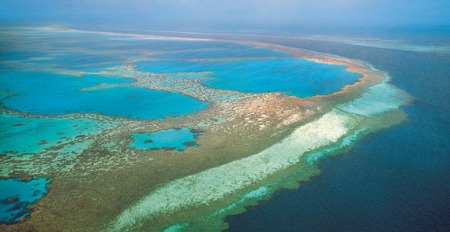 Before we talk about the Great Barrier Reef, it helps to define what a reef is. Wiki helps us:

A reef is a rock, sandbar, or other feature lying beneath the surface of the water, resulting from deposition of sand, wave erosion planning down rock outcrops, and other natural processes; or: they can be created through biotic processes dominated by corals and calcareous algae (called coral reefs). Coral reefs are composed of calcium carbonate secreted by corals. (Corals are colonies of tiny living animals – called polyps – found in marine waters).

What this means is that coral reefs are technically structures created by living things. And the greatest reef – The Great Barrier Reef – happens to also be the single greatest structure made by living organisms.

Composed of over 2,900 individual reefs and 900 islands stretching for over 1,600 miles, the Great Barrier Reef is in the Coral Sea, off Queensland coast (Australia). Yes, you can see it from space. 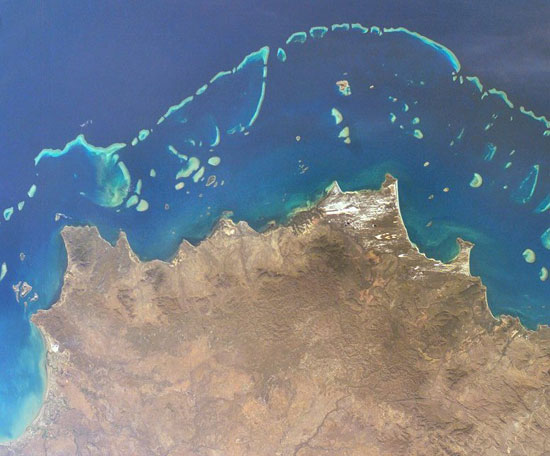