Newslite featured this odd story about an “evil clown” service. 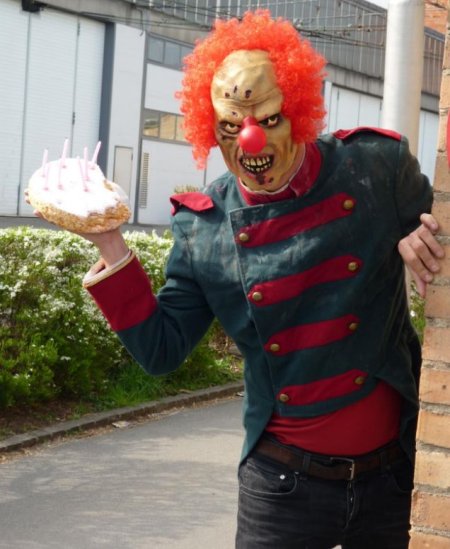 Run by Dominic Deville, the service features a menacing-looking clown who will stalk his “victims” for a week, sending texts, making prank calls, generally lurking around. Eventually this all culminates in a pie-to-the-face (or a birthday-cake-to-the-face).

Deville set up the “Evil Clown” service in Lucerne. He says he was inspired by horror films like Stephen King’s It

and the thriller The Game

, with Michael Douglas. And the service is only 666 Swiss Francs. Bwahahaha.

The UK Metro originally reported that the Evil Clown was a birthday service for kids, but Deville recently said that the service is only for those 18 and up. So you can send in the clowns for your co-worker or older brother in college, but not junior. Which is too bad, really, because we get a kick out of seeing kids get scared senseless by clowns.

For Your Loved One’s Birthday, Get Him An Evil Clown was last modified: October 25th, 2015 by Chris Valentine
Tags:bizarre
Share:
Previous Post