A Florida couple – Donna Brinkle and Joel Brinkle – have declared themselves as a sovereign nation.

The Brinkles used to own 5 acres in Geneva. (That’s Geneva, Florida – an unincorporated area in Seminole County, population 2,940). Then, in the 1990s, they stopped paying taxes and declared themselves independent of all government authority. They have been battling the government ever since. Joel, 76 years old, went to jail. The IRS went after their money, and Seminole County sold their home because of unpaid taxes.

From the Orlando Sentinel:

Florida’s attorney general is suing them, accusing them of fraud and harassment for filing a lien naming four Seminole County officials. The couple recorded the lien in April, claiming ownership of every piece of property held by those officials. The Brinkles have filed more than two dozen liens in the past six years, according to government records. They name many people, including former President Clinton.

Other things this odd couple have done include: Joel getting arrested three times for driving without a license. He doesn’t need a license, he said, because, just like his wife, he has proclaimed himself a sovereign nation. 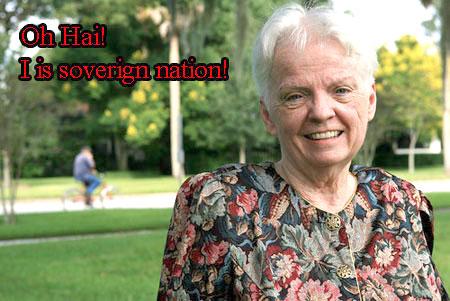 In February the Brinkles tried to buy a $700,000 house in Alaqua. Instead of money, however, they presented him with a homemade money order. According to Donna Brinkle, that money order was perfectly valid. As head of her own sovereign country, she has the power to create her own monetary system, and she did.

LOL, we’ve heard that the elderly are stubborn… but these two are one step away from turning into Jonathan Lee Riches.