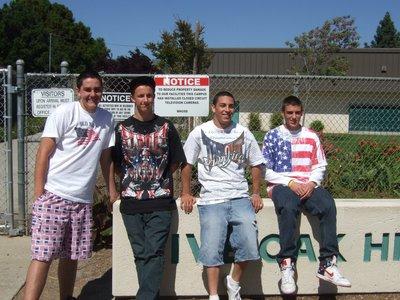 Daniel Galli, Austin Carvalho, Matthew Dariano, Dominic Maciel, and Clayton Howard – students at Live Oak High School in Morgan Hill, California – were asked to turn their American flag T-shirts inside out or go home when they wore them to school on May 5th, 2010 – otherwise known as Cinco de Mayo.

Assistant Principal Miguel Rodriguez told the students that their clothing was not appropriate for the May 5th holiday. Given the options, the students decided to go home instead of changing their clothing. Apparently, the school admins found the shirts “incendiary” which could have led to fights.

Interesting here are some of the comments:

Annicia Nunez, student: “We don’t deserve to be get disrespected like that. We wouldn’t do that on Fourth of July.”

Conn Carroll, blogger: “When Americans celebrate St. Patrick’s Day or Columbus Day, don’t we always see American flags flying right along side Irish and Italian ones? Why are the Mexican Americans at Live Oak High so insulted by the flag of the country that they live in? Do they not consider themselves Americans first?”

Roger Ebert, film critic: “Kids who wear American Flag T-shirts on 5 May should have to share a lunchroom table with those who wear a hammer and sickle on 4 July”

Police presence has been stepped up at the school. Most of the boys have not returned to the school since the incident.

Students of the school held a rally after the incident. 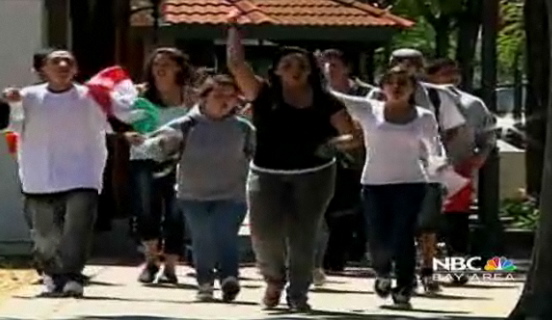 The boys said they had no intention of sparking conflict, but that’s not entirely true, is it? They all got together and made the conscious choice to wear American flags on a Mexican holiday. They knew it might spark conflict. This, of course, doesn’t mean that the school officials were right. They should have let it go. But since they didn’t, everything has ballooned nicely.

Cinco de Mayo commemorates the Mexican army’s victory over the French at the Battle of Puebla on May 5, 1862. A few things: