Continued From Page One

This celebrity blogger (real name Mario Lavandeira) got sued for running a web site which invades Riches’ privacy and puts his life in danger. 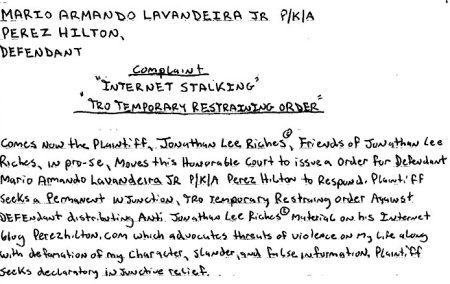 Riches states that he carried on a years-long sexual relationship with Hilton and once bought the blogger a $23,000 diamond ring. Riches is seeking the closure of Hilton’s popular web site. 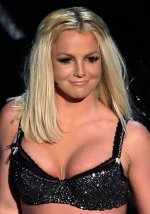 According to Contact Music, Britney Spears got sued for holding Riches at gunpoint and forcing him to commit crimes, like the identity theft he got busted for. Also he says Britney forced him to pay for abortions, breast implants, drugs and alcohol. 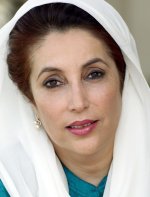 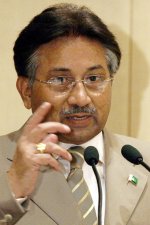 Yes, the poor woman who was assassinated is named in a suit along with Musharraf.

Plaintiff seeks a temporary restraining order against Defendants Benazir Bhutto, Pervez Musharraf, Shaukat Aziz and the Immigration and Naturalization Service (INS) to stop his extradition to Pakistan on March 2012 because he will be tortured. Plaintiff asserts that the case is one of mistaken identity and that Pakistan wants another Jonathan Lee Riches, who is an international fugitive and made nuclear weapons with Pakistan scientist A.D. Khan.

That’s not all… here comes the really goofy stuff: 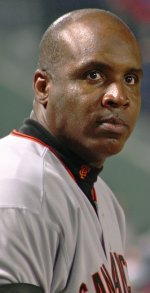 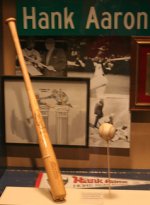 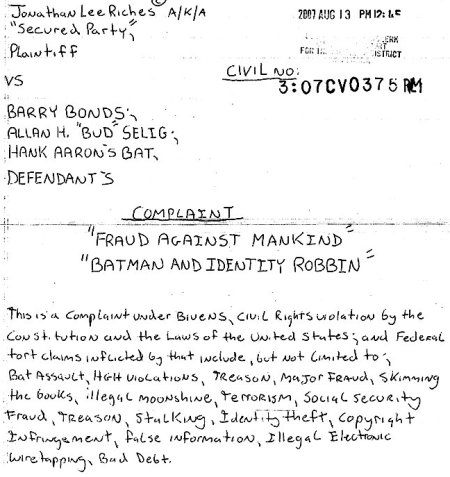 A copy of the Bonds complaint can be found here.

The lawsuit allges things like “bat assault, treason, illegal moonshine, treason (again!), stalking, illegal wiretapping, and bad debt” He requests that the court file a temporary restraining order against the broadcast of MLB games, all defendants (amd their pets!!), and is seeking 42 million dollars worth in swiss francs!

You gotta read this thing for yourself, I’m about to lose it.

On April 9, 2008, Riches filed a request for a temporary restraining order against Take-two (publisher of Grand Theft Auto), as well as developer Rockstar Games, FCI Williamsburg, and the game Grand Theft Auto itself, claiming that the defendants “put me in prison.”

“Defendants contributed to Plaintiff committing identity theft. Defendant’s games show sex, drugs and violence which offends me.” Riches continued, “Defendants put me in prison. I face imminent danger from violent inmates who played Grand Theft Auto who will knock me out and take my gold Jesus cross.”

And the BIG ONE – Suing the Entire World!!!! 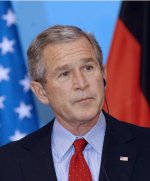 Here is the PDF of the document, where Riches does really intend to sue the entire world.

Remember The Usual Suspects? This guy reminds me of Keyser Soze. Sitting in an interrogation room, reading billboards and making up stories… except instead of a billboard it’s probably all the TV news that Riches is watching. 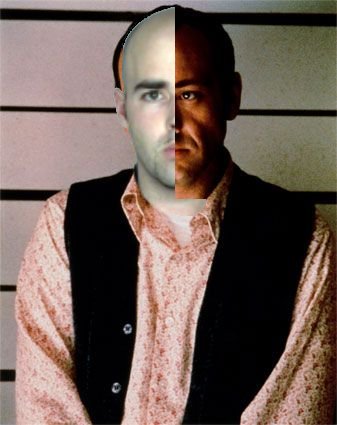 It’s all there…and I’m tellin’ it straight, I swear!

As the AJC says:

A number of Riches’s lawsuits have been dismissed as being “frivolous, malicious” or failing “to state a claim upon which any relief could be granted”. Willis Hunt, the U.S. District Court Judge who dismissed Riches’ suit against Vick as “farcical,” opined that his lawsuits were clearly self-promotional.

Well, duh. Either that or the guy is quite insane.

But I don’t think he’s insane. The guy is too clever and funny – to me it looks like one inmate has discovered an amusing way to pass the time in prison and at the same time get back at the system that put him in there. And since the taxpayers foot the bill, the joke’s on us. We might as well laugh – we’re paying for the comedy!

Read Over From Beginning

[…] He has filed cases against Steve Jobs claiming that the Steve hired O.J Simpson as a hitman to clear a building with pyrotechnics stolen from Great White as well as for aiming nuclear missiles at Lance Armstrong’s bike and price cutting iPhone users. He also sued Martha Stewart for mental and emotional stress after getting poison ivy and falling in groundhogs on her property. Well Jonathan, we have no idea who you are going to sue next, but all the best with your endeavor. You have clearly made this your livelihood. […]