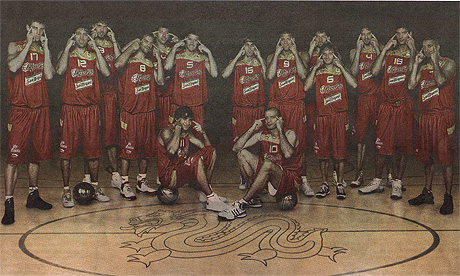 Spain’s Olympic basketball teams have risked upsetting their Chinese hosts by posing for a pre-Games advert making slit-eyed gestures. The advertisement for a [Spanish] courier company, which is an official sponsor of the Spanish Basketball Federation, occupied a full page in the sports daily Marca, the country’s best-selling newspaper.

The advert features two large photographs, one of the men’s basketball team, above, and one of the women’s team. Both squads pose in full Olympic kit on a basketball court decorated with a picture of a Chinese dragon. Every single player appears pulling back the skin on either side of their eyes.

Pete Thamel, who covered Spain’s victory over China earlier today for The Times, writes in from Beijing that “the typically sedate Chinese crowds vigorously booed the Spanish basketball team at times in Spain’s overtime victory here on Tuesday night. It’s unknown whether it has anything to do with the [advertisement]”

NYT gives an update specifying that the Spanish basketball team is also sponsored by Li-Ning, the Chinese footwear company (Li-Ning is sometimes referred to as the “Nike” of China). The Spanish Basketball Federation and Li-Ning have a sponsorship agreement going through to 2012.

The ad may not be as racist as some are pointing out:

So while the gesture of the Spanish teams in the ads might seem culturally insensitive at first glance, it’s a little more complicated than that when you look deeper, given that the ad was for, and must have been approved by, a Chinese company.

“It turns out that in the photo shoot for the submission of our team, one of our sponsors asked us to make, as a ‘wink’ to our participation in Beijing, an expression of Eastern eyes. We felt it was something appropriate and that it would always be interpreted as an affectionate gesture,” says Calderon. “However, some European media have not looked on it well,” laments the linchpin of the national team.

OddCulture doesn’t see why the ad would have to be “approved by” a Chinese company when the advertisement is created by a Spanish company. But it is possible that the ad was a “nod” to the deal with Li-Ning.