The concept of the virtual grocery store in South Korea is getting a boost thanks to a grocery chain called Tesco Home Plus. The virtual grocery store ,or “E-Store”, allows consumers to do their grocery shopping by using their cell phones. For example, commuters who are waiting for their train can go over to a virtual E-store on the subway platform, which is a huge billboard containing images of all the items for sale. They then take a picture of the QR codes for each product they want, which are then added to the virtual baskets on their smart phones. When they finish their sale, the stuff they ordered will be waiting for them when they get home. 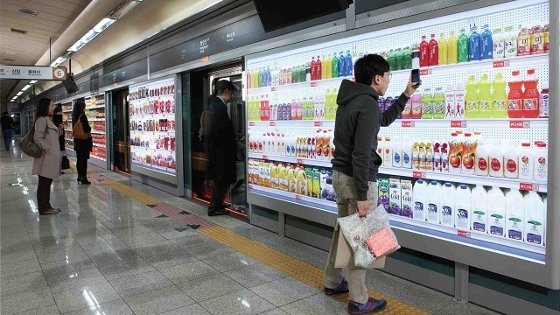 Home Plus (a branch of Tesco) said that their online sales went up 130%. South Korea is one of the hardest-working countries in the world. According to Forbes, a South Korean on average works 2,357 hours per year with almost no time off. Since they are pressed for time, convenient virtual shopping while they are on the go seems like a successful idea.

Thanks to Q-Burns for the story!