A Russian girl got a tattoo artist’s name inked across her face only 24 hours after meeting him! Lesya met Rouslan Toumaniantz in an online chat room, fell in love with him almost immediately, met the guy in Moscow, and decided to let him ink the name “Ruslan” over her face in huge gothic font. He also did a smaller tattoo above her eyebrow that says “All For Love.” 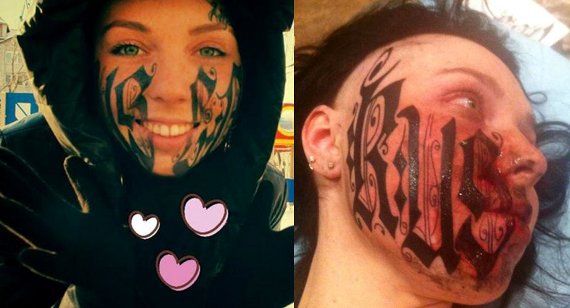 Lesya, who now uses Rouslan’s last name of Toumaniantz, said this about the tattoo:

It’s a symbol of our eternal devotion. I’d like him to tattoo every inch of my body.

The pair are now engaged and Lesya is learning to be a tattoo artist under his tutelage. She also plans to get full body tattoos.

Rouslan Toumaniantz was in the news a few years ago when he got in trouble for tattooing a bunch of stars across the face of 18 year old Kimberley Vlaeminckin, who said that he did it while she was sleeping. It turns out that she just didn’t want her dad to think badly of her – something she probably should have thought about before getting the work done. But hey, who cares about killing somebody’s career, right?