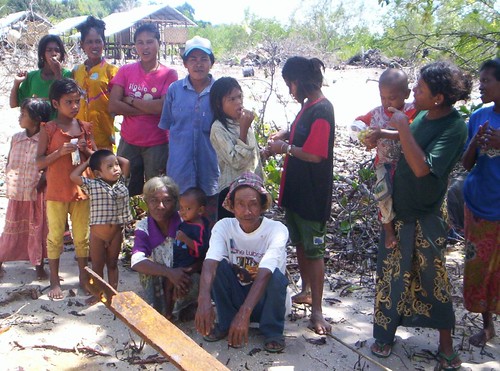 In today’s fast paced societies and technology obsessed world, we barely identify with the “natural” way of life anymore. SO when rare tribes are discovered and brought to media attention, it seems all the more shocking, especially when their traditional way of life is not what we consider “normal”. The Moken tribe, also known as Underwater people are one of the most interesting groups in the world, residing the Mergui Archipelago, which consists of about 800 Andaman Sea islands. The watery makeup of the region has created a race of people who are the closest thing to mermaids and mermen.

The Moken Tribe are a semi-nomadic tribe that depends almost entirely on the sea. They do not recognize any national borders in the territory they roam (Thailand and Burma both hold claims to the region) and have earned the nickname “sea gypsies”. Although They are a peaceable tribe, they are unfortunately often persecuted by both Thai and Burmese governments.  The Thai and Burmese both hold claims on the area but are united in their belief that The Moken tribe should be restricted to movement only within National Parks, despite them having lived in this manner for centuries. They unique way of life faces extinction from modern fishing methods. Big ships with advanced fishing methods are depleting their food sources, forcing them to change their ways. Some of them now settle in villages in bamboo huts, selling different handicrafts or working on boats to cater to the emerging tourist industry. Factors like political issues and natural disasters like tsunami in this region, in addition to oil companies that drill off-shore or industrial fishing affected the number of these semi-nomadic people and they stared to diminish recently.

The origin of this tribe comes from Southern China and it is believed that these people have migrated to Malaysia, Burma and Thailand 4,000 years ago. They lived for most part of the year in wooden boats made by themselves and called “kabang”. This Kabang has multiple purposes, being their bedroom, kitchen and means of transport. They migrated between the islands based on multiple factors, such as to find food, the change of wind, due to diseases or for security reasons.

Usually, monsoon occurs from May to October bringing a lot of rain, so during that period Moken people live in temporary houses located on the islands’ eastern part, as they find protection from winds there. They use this time to build new boats for the next fishing season and reject the modern way of life and material possessions of any kind do not attract them.

There are a few families from the Moken tribe that still sail across the Mergui Archipelago in kabang for more than seven months per year. They are so connected with the water that they believe the ocean is a whole universe. They free-dive and hold their breath for about three minutes. According to the scientists, these people spend about 60% of their life submerged in the water, which can be compared to the life of a sea-otter.

They have a huge knowledge of the sea, which helps them to use simple tools like spears and nets to get their food from the sea. They dry everything which is not consumed and barter it at local markets for some other necessities. Their children spend so much time underwater that their eyes accommodate the visual focus to it and they see amazingly clear in the water.

Apart of Thailand, which is a home of approximately 12,000 people of this tribe and already mentioned Burma, sea gypsies can be found also in Malaysia, Brunei, Indonesia and the Philippines, while the Moken are only one of the multiple sea gypsy tribes. They are usually animists, who conduct spirit-offering festivals and celebrate death with songs, dances and drinks.