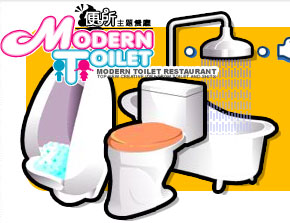 Lots of oddly-themed restaurants can be found in the countries of Asia. One is called the Modern Toilet Restaurant in Taiwan. The theme is exactly what you expect from the name – it’s a toilet themed restaurant. The commode-style eatery is also called The Martun. “Martun,” or “Toilet” in Chinese, is located in the city of Kaohsiung and has long lines on the weekends as patrons wait for a toilet seat in the bright-colored interior.

At the Modern Toilet restaurant in Taiwan, food is served in bowls that are shaped like Western-style toilets or Asian-style “squat pots”. Restaurant manager Hung Lin-wen said the original inspiration came from a toilet-shaped spaceship that he saw in a Japanese manga called Dr. Slump (he was probably reading it while on the toilet). As you might expect, Dr. Slump

is filled with bathroom jokes.

Some customer quotes about the Modern Toilet restaurant are enlightening:

“We’ve never eaten on toilets before, even at home!”
“I like the toilets! It’s fresh idea to put food in these toilet-like containers. My family and I came here together.”

Martun has now grown to at least 14 locations throughout Taiwan and China (including Hong Kong). The food selection includes includes pasta, chicken, curries, and Mongolian hot pot. Desserts are served with names like “bloody poop,”, “diarrhea with dried droppings,” “green dysentery”. Go there an order an “ice ream sundae feces Uji Gold” (or something like that). As more than one diner has probably said: “This place is the shit!” One question, though: in the Modern Toilet restaurant, how can you tell where the bathrooms are?

Update
In April, 2006 the Martun officially changed its name to Modern Toilet Restaurant. Check out the website.