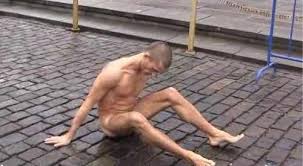 There are many people around the world who support different lofty causes. In attempt to raise people’s awareness of significant issues, however, some of them run to extremes, hoping that more people will support them and that this will lead to real changes. Here are some examples of crazy activists…

A young Peruvian man called Richard Torres married a tree. As shocking as it may sound, the goal of this obsessed environmentalist was to raise public awareness and to provoke a reaction in the public that aimed towards saving environment in Argentina. For that reason, he organized a wedding party with a ring, guests, toasts and even a bouquet, just like real wedding ceremony (minus a consenting bride).   Dressed in his white suit, blue bowler hat with comical glasses, Mr Torres married a tree in the presence of crowds that kept gathering in the wedding location, in a popular city park in Buenos Aries.

Keeping all the traditions, he lovingly promised to devote himself to his new wife in traditional vows. The tree, on the other hand, got a few kisses from the bridegroom to keep the ceremony as authentic and classic as possible, although she did not appear to reciprocate his affections. For objective reasons, Mr Torres played the role of the bride and threw the bouquet himself into the crowd. A happy-looking man caught it and delighted the audience. In the end of the ceremony, there was a toast to celebrate the happy event. As comical as the event was, and successful in raising awareness, it had little impact on the future of Argentina’s environmental issues.

The Man Who Nailed His Scrotum

Many things have happened on Red Square, Moscow.  This place has played host to rebellions, giant military parades, public executions and more recently, unusual activists.. No-one expected a Russian performance artist to mutilate himself on Red Square. He appeared in the news around the world because of his idea to nail his scrotum to cobblestones and he really did it! It was his way of protest against the “police state” in his country. Pyotr Pavlensky, the crazy activist, chose the Police Day for his protest campaign.

According to him, this action is a metaphor for the fatalism, apathy and political indifference of the Russian society today. He thinks that Russia is essentially a large prison, where the police apparatus steal people’s money to grow and expand its repressive structures. It has become a heavily censored state.

This act is not the first crazy and self-harming thing Pavlensky has initiated. He became famous for sewing his lips in protest against the Pussy Riot members’ jail sentences. Another crazy act was wrapping himself in barbed wire while naked in front of the government building in Russia. Many people believe that Pavlensky’s self-harming art is a gesture of his despair.   After nailing his scrotum to the cobblestones, an hour later Pavlensky was taken to hospital and later was taken to a police station. In accordance with the Russian laws, he can be jailed for 15 days. Although he achieved international fame for the acts, once again, these crazy antics had little influence on the political sphere.

Clayton Pettet, a student artist intends to have sex for the first time of his life in a Hackney gallery with another boy in front of a live audience of 100 people. The 19-year-old activist will lose his virginity in a special performance, called Art School Stole My Virginity. The crowd will then be asked some questions regarding what they have seen. The goal is to direct people’s attention toward the traditional values and the virginity importance in today’s society. According to Pettet, the virginity has currently heteronormative definition. He believes that it is not real, but only an ignorant word, which aims to keep the woman’s worth before marriage. We await the verdict on the success of his performance, and whether or not it qualifies as porn.