Here’s an odd story about three women in blue burkas who started their own band. It’s called… Burka Band (what else?) and they’ve got a song called Burka Blue. For more, let’s watch this YouTube vid: 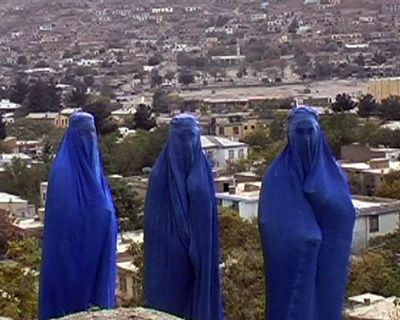 “Blueee, burka blue,” sings the lead singer on the tv, while another woman plays the drums and a third the guitar. 25-year-old “Nargiz” laughs when she shows us the video in Kabul, Afghanistan’s capital. She is one of the three girls who started the Burka Band two years ago.

“It was a lot of fun, but also very scary. Afghanistan is still a very dangerous place for modern women, and when we shot the video we had to do it very discreetly because no one could know that we were playing music”, says Nargiz.

Nargiz started the Burka Band when she met a German music producer in Kabul in late 2002. The producer was teaching Afghans to play modern music, and Nargiz learned to play the drums. One day she wondered why all the burkas in Kabul were blue, and together with two friends she wrote the song “Burka Blue” which is about burkas and the way you feel when you wear them. The song was recorded in Kabul with help from the German producers. The band would rehearse behind locked doors, so nobody would find out that the women were playing music. The burka also helped hide who the band members really were.

“If people in Afghanistan knew who the members of the Burka Band were, we could be attacked or killed because there are still a lot of religious fanatics here,” says Nargiz (not her real name), who hasn’t told any of her friends that she has played in the Burka Band. The song became a hit in German clubs after it had been remixed by a german DJ. The band even performed at a concert during a trip to Germany.

Sample Lyrics:
My mother wears a burka, I must wear a burka too. We all wear a burka, we don’t know who is who. Blueee, burka blue.

One person referred to the band as IslamoPrimus. We can kinda see that.

Here is their official web site.