Pittsburgh Power owner Matt Shaner fired his entire team at a pregame meal at an Olive Garden restaurant in Orlando, Florida. The 24-man roster was released while they were eating. No word on whether the Arena Football League players were let go after the breadsticks were served but before the main course, which includes classic recipes such as Five Cheese Ziti al Forno and Capellini Pomodoro. The firing came after the players union declared a strike on Friday. Power center Beau Elliott said:

“I’m putting food in my mouth and being read, from a piece of paper by our owner, that the Pittsburgh Power as a whole is now terminated. Mid-statement, all the players got up and left. Every player got up and left while he was still talking. There were 15 to 20 angry, large individuals.” 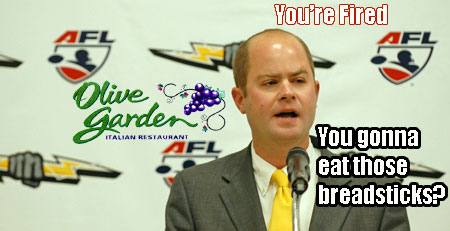 Some of the players decided to leave the AFL Players Association and sign new contracts for the team. They went on to play the upcoming game against the Orlando Predators, which by the way, pulled a similar stunt with their players (but not at Olive Garden – maybe Pei Wei’s?) The Predators players were placed on recallable waivers. Fullback Marlon Moye-Moore said:

“We all came in prepared to play a football game today. About 5 o’clock, my owner, Brett Bouchy, calls me and tells me that he put all of our guys on recallable waivers, and we’re all cut. ‘Don’t show up to the arena,’ and that’s it.”

The Power/Predators game was still broadcast on the NFL network, but with mostly replacement players. Orlando still got their butts kicked 40-26.

Matt Shaner said that those players who didn’t sign new contracts had to return to Pittsburgh on their own dime. Whatta guy!

Most players in the league made $400 per game last season. The union wanted a 300% increase in the minimum salary. AFL owners countered with a $100 raise for most players plus $1675 per game for starting quarterbacks. The counteroffer was rejected by the AFLPA. We don’t know why – don’t they realize that you can get wonderful meals at various Darden-owned joints like Red Lobster and LongHorn Steakhouse for perfectly reasonable prices? It was not said in the articles if the fired players drowned their sorrows at Darden-owned Bahama Breeze.

Thanks to Josh for the link.