Here’s something that should cause car lovers to wince. As you all know, Monte Carlo (Monaco) is a major tourist destination, home of the Grand Prix, boxing championships, poker finals, and a casino haven. (Oh, Tony Stark likes to hang out there, too). Naturally, lots of money flows in and out of the place. Which leads to flashy symbols of wealth, as is evidenced by, say, Bentleys, Ferraris, Aston Martins, Porsches, and Mercedes’ being flaunted about. So, what are the odds that one of these cars will be involved in an accident? We’d say pretty good. But how about all of them in the same accident?

That’s what happened when some blonde woman crashed her Bentley into somebody else’s Ferrari, Aston Martin, Porsche 911, and Mercedes Benz. The woman, who was unidentified in the news reports, was driving her $400,000 Bentley Azure around the Place du Casino (an awesome looking Beaux Arts structure designed by Charles Garnier), when she scraped a white Mercedes S-Class ($122,000) before running into a black Ferrari 430 ($235,000). To make matters worse, her passenger side was hit by a $245,000 Aston Martin Rapide, which bumped into a $130,000 Porsche 911. 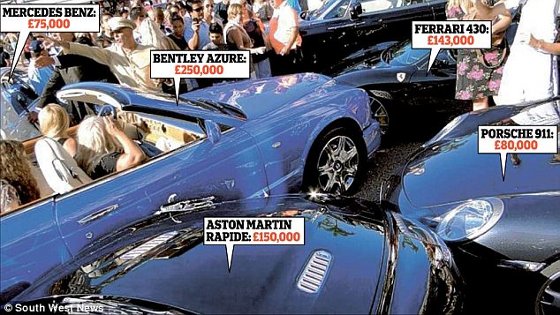 Adding to the embarrassment of mangling vehicles more expensive than most of our freakin homes, the unfortunate woman found herself trapped in her Bentley since her doors were boxed in by vehicles on both sides. So she had to sit there as curious onlookers gathered and shot photos.

Cost of repairs to all the cars was estimated to be around $65,000, which includes new bumpers, wings, and a new door for the Azure.