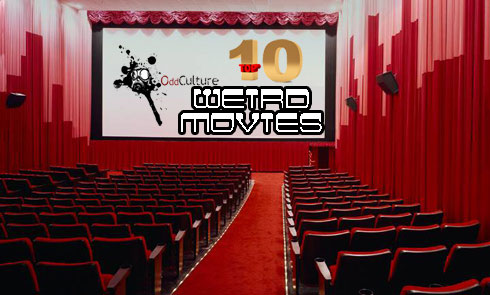 Odd Culture likes weird movies. We always have. Most movies you see in American theaters are straightforward, mainstream affairs. However, it’s still difficult to make a list of the top 10 weird movies, because there are so many films in the world to choose from (Japan, India, etc) and thanks to the fact that it’s easier to make movies with low budgets, lots of independent filmmakers can get into the act. And since they don’t have the budget available to guys like James Cameron or George Lucas, they have to do other tricks to stand out. Sometimes this means making films that are very odd and weird. Which we like. Thanks, dudes!

Hyper-kinetic black-and-white insanity in the tradition of Tetsuo (see #8), but without all the gore. Dude gets struck by lightning as a kid and the “dragon” inside him awakens. His aggressive personality leads to multiple instances of electroshock therapy throughout his life, which only makes things worse. His uncanny ability to conduct electricity leads to him having to ground himself every night before bed; already a top notch boxer, he spends his time as a “lizard-whisperer” (if you lose your pet lizard or kimono dragon he’ll find it, we guess), and occasionally he gets so angry that he has to wail on his guitar at the loudest possible volume. Little does our Dragon Eye Morrison know but there is an even more powerful “electric” madman calling himself Thunderbolt Buddha, who has the ability to receive and interpret cell phone signals, and wears a mask of the Buddha on half of his face. It all leads to a crazy showdown involving many lightning strikes, flashing lights, seizures, and Sonic-Youth inspired rocking. An odd little punk item with many WTF moments. 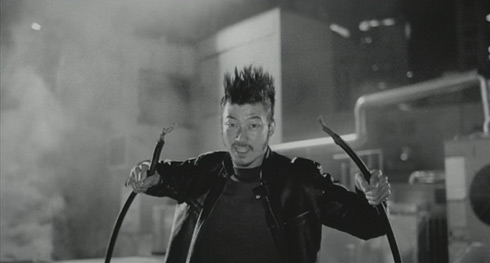 It’s difficult to describe Takashi Miike’s Gozu (also known as Yakuza Horror Theater). It’s a Lynch-inspired, off-the-wall Yakuza fantasy that starts off with the murder of a cute little Chihuahua by a gangster named Ozaki who thinks it was a “Yakuza” attack dog. Are signals from the TV driving him crazy? When the main mob boss tasks Minami with knocking him off, strange circumstances lead Minami to the town of Nagoya, which is populated by some of the most bizarre characters you will ever see. The inn where Minami stays is run by an old woman who is constantly squeezing milk from her breasts into bottles. There’s the weird dude with a cow’s head and the re-appearance of Ozaki as a beautiful woman. There’s a guy who likes to shove a ladle up his ass to achieve orgasm. Then there’s the ending sex scene which climaxes with the weirdest birth this side of Xtro. More of a surreal comedy/drama than a gangster film, Gozu is unlike any of Miike’s other output. It probably should be taken metaphorically, as a literal reading of the storyline makes no sense (but that’s applicable to most of the movies on this list). There are readings of the movie as a homosexual parable, an examination of the masculine and feminine sides of a personality, and another point about a character’s need for mom – we think. Check it out for yourself – it’s awesome. 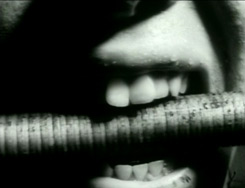 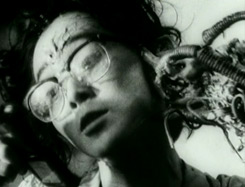 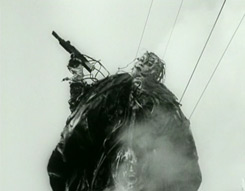 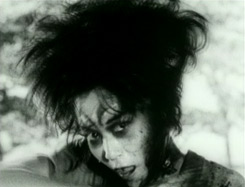 This one definitely belongs in the list of weird movies. Also known as Pinocchio sqrt(964), this is a completely bizarre cyberpunk nightmare similar in tone to Tetsuo, but more concerned with flesh and infection than machinery. Directed by Shozin Fukui (who also did Rubber’s Lover

, which is almost as bizarre), this movie is a weird hyper-kinetic endurance test. It stars Onn Chan as a weird girl named Himiko who stumbles upon an even weirder dude with a small patch of hair in front (Hage Suzuki). He can’t talk at first – he’s more like a lost dog – but she sees the word Pinocchio 964 (don’t forget that square root symbol!) tattooed on his body so she spends the next 10 minutes trying to teach him to say his name. Apparently, from what we can tell, Pinocchio is some kind of experimental sex slave created by this crazy guy who just wants to make sex slaves for people. We don’t know. He freaks out when his great pet project Pinocchio escapes into the real world, which is understandable considering that Pinocchio has major issues, like melting and bleeding and screaming and whatnot. After he and Himiko do the dirty, they both seem to suffer from major malfunctions (think Ebola X 10), which results in Himiki running away into the subway. Once there, we are treated to at least 5 minutes of Himiko puking out this weird oatmeal-looking stuff, puking again, and again, and again. We’re serious – it goes on for at least 5 minutes straight. Just when you think you’ve had enough of this repetitive puking, Himiko decides she wants to roll around in it, and then eat it. Hey, man, they’re Japanese. You can buy women’s panties in vending machines there, so what’s a little puke-eating for kicks? Anyway, we guess Himiko doesn’t take too kindly to being sick, so she starts treating Pinocchio like dirt, going insane, chaining him up to a large rock, which he eventually drags behind him as he runs around the city for what seems like an eternity. He runs so much he makes Forrest Gump

and Jim Fix look like couch potatoes. Oh yeah, at the end, Himiko rips her face off to reveal this huge monster looking head, which Pinocchio rips off and places upon his own head. Apparently, this is a happy ending. 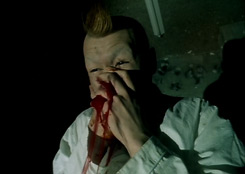 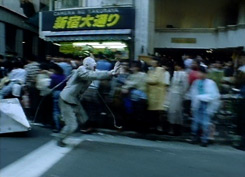 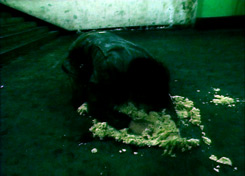 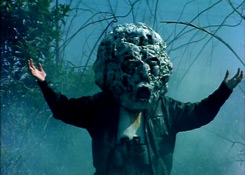 It could be said that David Lynch is the godfather of weird movies. This flick is a good example. Blurred figures in a room, a bizarre sitcom on television featuring people in rabbit suits, Polish dudes talking about God-knows-what, a strange lady talking about yesterdays and tomorrows (“I suppose if it was 9:45, I’d think it was after midnight!”). Uh, Laura Dern playing an actress in a movie about an affair, which is revealed later as a remake of an unfinished film where the leads were murdered. Dern’s character loses it and becomes the character she’s playing, or perhaps she’s a prostitute, or maybe both, or something. There’s ugly closeups of faces, using digital video, and a bunch of prostitutes doing a dance to the Locomotion. Somehow a strange gypsy hypnotist is involved. We think Inland Empire is just a movie about a woman who has an affair, and the guy’s wife murders her, and perhaps there’s some kind of comparison with Hollywood actresses to whores. OK, cool, but then David Lynch gets his hands on it and makes the whole thing almost impenetrable. One of Lynch’s weirdest movies, and that’s saying something.

Good. Now please explain it to us.

This woman just had the plot explained to her. 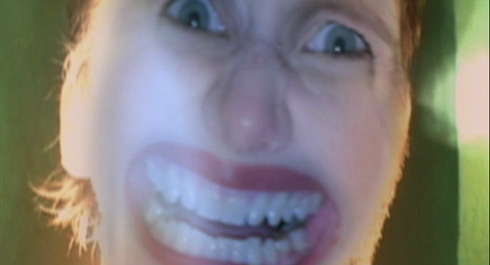 Read on Entries 1 Through 5