With the 2008 version of Death Race, a remake of the original Death Race 2000

, Paul W.S. Anderson (who helped bring us the crappy Resident Evil movies and the crappy Alien Vs. Predator

), once again proves that he shouldn’t be allowed anywhere near a camera. Not only does he bring us an anemic storyline that holds none of the inventiveness of Paul Bartel’s original, but he can’t be trusted to stage a coherent action sequence instead opting, once again, for the shaky, seizure-inducing camerawork where nothing is clearly visible for more than a split second. At the end of a car chase, you’re sure something happened, but you don’t know what, and on top of that you have a tremendous headache. If there isn’t a petition around to ban shaky-cam that I can sign, I’m about ready to start one. 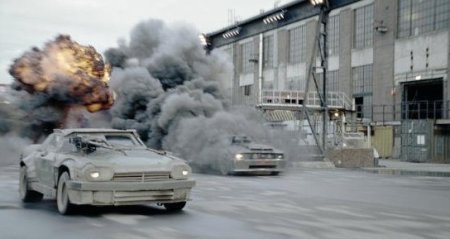 This is what gets Al Gore so worked up.

The original Death Race 2000 was a low-budget Roger Corman vehicle set in the near future (for the 70s, anyway) where a cross-country road race has become the national pastime. With America having been transformed into a fascist police state, the “Death Race” allowed drivers to kill one another if possible, and also to score points by running over pedestrians. Starring David Carradine as Frankenstein, the disfigured audience favorite, and Sylvester Stallone as Machine Gun Joe, the hated bad guy racer, Death Race 2000 was a fun commentary on audience bloodlust and the rise of an imperial America (the President now resides in a palace in China). I won’t get off track, because there’s enough to talk about in the original movie to fill up pages. 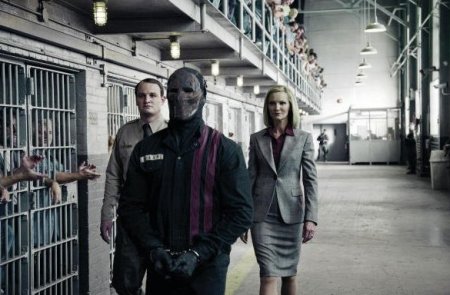 Anyway, back to the remake, simply titled Death Race and set in the year 2012, where we are told the American economy has totally collapsed. Crime is so bad that massive prisons are built and their control given over to private corporations. Enter the Death Race, a massive television/internet event where prisoners are given a chance at freedom if they can win five races, which take place on a prison island and involve souped up armored cars and tanks, and huge weaponry. Everything is controlled by a blonde female prison warden played by none other than Joan Allen, who you may have seen on recent seasons of 24. In fact, for most of the movie’s running time it’s almost as if she plays the same character, watching events unfold on multiple monitors. The warden is a bad person, by the way – since the prison’s Frankenstein has been killed, she schemes to have former racer and mill worker Jensen Ames (Jason Statham) framed for his wife’s murder and thrown in jail so he can take up the mask himself. Millions of people are watching, Jensen, so let’s give a good show!

This is for my girlfriend, who requested this photo for unknown reasons.

With Death Race, Paul W.S. Anderson – to reference another recent movie – goes full retard. The film is exactly like a video game – which is what you would expect from the guy who directed Resident Evil

– but this time around the line between movie and video game is so blurred that I don’t think it makes a difference anymore. (I can almost guarantee that if you threw this movie into your Playstation 3, your friends wouldn’t be able to tell whether they were watching Death Race or playing Twisted Metal). I mean, during the film’s three major racing sequences, drivers can arm their vehicles (smoke, napalm, machine guns, shields) only after passing over special electronic triggers on the road. (I looked for the controller by my seat but didn’t find any). The rest of the movie is filmed like a hip hop video. In one completely hilarious sequence, female prisoners are bussed in so they can act as navigators, because the audience apparently approves of it. All the female prisoners are hot, and as they file out of the bus in slow motion, with their tits and asses jigglin, hiphop music is turned up on the soundtrack. Funny stuff. Oh, and by the way, the movie finds it necessary to have characters constantly offer narrative commentary on what is transpiring, in case you are too dumb to figure it out. Ian McShane’s character “Coach” provides running zingers after every major plot event (“Now that’s entertainment!”, “I love this game”, and so on). Where’s the laugh track? 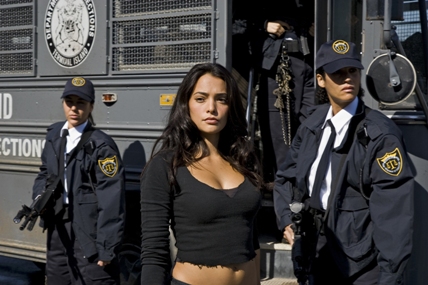 All female prisoners, especially race car navigators, are hot. Those are the rules!

The few positives of the movie involve Jason Statham’s performance, which is enough to keep you interested, and the funny bit at the end where a profanity-hating warden Hennessey loses it and lets loose with a tirade of expletives. I also enjoyed the occasional commercials we see for the Death Race event, which are dead-on satires of todays reality TV shows. I have no doubt that America is one good depression away from bringing back the Roman coliseum. But there is so much more that could have been done with this idea, and Anderson has no intention of driving down that route. He’s more interested in satiating the desires of 14 year old boys everywhere, which I assume is this movie’s target audience anyway. Oh, don’t forget the best bit – right before the end credits roll a disclaimer appears telling the audience not to reproduce any stunt we see in this movie! I’m glad they told us, I was just about to saddle up my SUV with napalm and Russian missiles. The only question is – why hasn’t Death Race been modified and released as a PG-13? This is where most of the money is to be made, I assure you. Statham, who is no Shakespearean actor but still is charismatic and likable, does his best with the material, but somebody must seriously stop giving Anderson money to make this stuff. I see Corman had a hand in producing this – why, Roger, why? 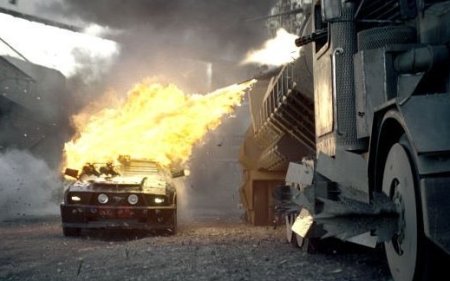