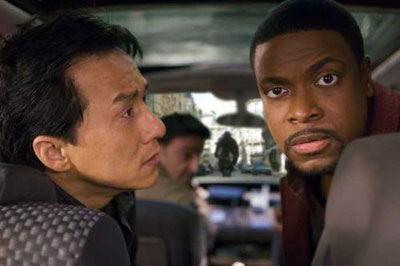 Don’t look at us! You bought the ticket!

WARNING: SOME SPOILERS AHEAD

I didn’t think that Brett Ratner, Chris Tucker, and poor Jackie Chan could sink any lower, but with Rush Hour 3, they do. I mean, I knew going in this was a cash grab, I knew that the movie was going to be bad, I just didn’t expect this level of sheer incompetence.

Yes, Tucker and Chan are back in the third installment of the buddy cop series, again directed by Hack-ner. Also returning from the first movie is Tzi Ma as Consul Han (now an ambassador), his daughter Soo Yung (played this time by Jingchu Zhang) and even Captain Diel (Philip Baker Hall) shows up. All three supporting appearances are so brief that if you blink you’ll miss them. Basically, Han is shot while giving a speech to the World Criminal Court about who the bosses of the Chinese Triad are. Clues lead Detectives Lee and Carter to Paris, where they encounter an American hating cabbie (Yvan Attal) who secretly just wants to be in on all the killing-for-no-reason that Americans like to do. Somehow, they managed to get Max von Sydow to play the part of Varden Reynard, the French ambassador. I guess he really needed the money. Roman Polanski even gets a part as a local detective who arrests the pair at the airport, strings them up, and gives them a cavity search just for fun (I suppose this happens in Paris all the time).

There’s your typical fish-out-of-water scenario, a “brother” from the orphanage where Lee grew up who has now become an assassin, various scenarios with Carter being loud and obnoxious in public and chasing beautiful women, and the inevitable finale at the top of the Eiffel Tower. It’s all very predictable (you immediately know who the bad guy is, you immediately know that somebody’s going to fall from the Eiffel Tower) but simply being predictable is the least of this movie’s problems.

Quite frankly, I have never seen more lazy writing in a movie in my entire life. Characters and plot points disappear as soon as they arrive. One particular character has important information tattooed on the back of her head, but nobody thinks of taking a photograph of it or writing it down. Soo Yung shows up just long enough to be used as a hostage and is moved off screen as soon as her safety is secured. To writer Jeff Nathanson she’s not important enough to even make it to the final scene – I wonder if she’s still in the elevator back at the tower. The bad guy shows up at the end only to be shot by – of all people – the frickin’ French cabbie. Say what?

There are really only two funny bits in the entire movie – one involving Jackie Chan on a swing singing out of tune and another joke modeled after Abbott and Costello’s “Who’s on First” bit. That’s right – one of the funnier scenes in Rush Hour 3 is a routine stolen from the 1940s. Yes, the movie is really that unfunny.

Action? Completely disposable, lightweight, and forgettable. Again, Jackie Chan is underused, limited to climbing walls and falling down draperies. In fact, I think Tucker gets better action scenes here. That is, when he’s not being a complete asshole to everyone around him. Ah yes, there’s a scene where our heroes make a parachute out of a flag and jump off the Eiffel tower to safety. It is a true WTF moment in a movie full of WTF moments.

I suppose I could talk about the racism and hatred in the movie, but really, Ratner and Nathanson can’t be bothered enough to expend any effort in that regard either. Scenes in the movie are scored to the most inane soundtrack composed by Lalo Schifrin (Hey, here’s a scene in a martial arts studio with a blind master – cue the Asian theme!) Elton John’s “Sorry Seems to Be the Hardest Word” swells up as the two have an argument. Carter sees Short Round on TV and gets weepy. Oh yeah, there’s a conversation about Carter shooting Lee’s ex-girlfriend in the neck. Ha ha! That’s inherently funny!

I’m struggling to think of more things to write about this horrible film, but I’m starting to forget pretty much everything about it – and I just saw the thing this morning.

I’ll just finish by saying that Brett Ratner is not a good director. At all. He has no original ideas of his own, has no particular style to speak of (even though Tucker actually had the nerve to call him “The Next Spielberg” – let’s not even go there), has no concept of how to properly film an action sequence, and finally, has no talent for comedy. As I left the theater, thinking about how Tucker gets paid $20 million for this movie (plus 20% of the box office gross), Chan gets $15 million plus 15% plus Asia distribution rights, and who knows how much Ratner is getting – instead of angry I just felt sad. Sad that this kind of money can’t even buy a decent movie anymore. I must admit that this is the first time I have ever seen a film where it was completely obvious that nobody involved in making it (directing, acting, or writing it) gave a shit about it in any fashion. I guess that’s something.