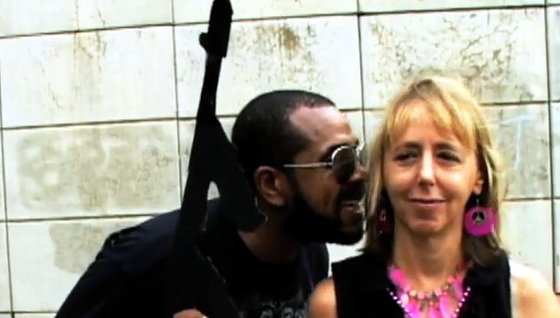 Oh, man, you gotta check out this anti-Blackwater video on YouTube.

Let’s first throw some words out there:

Blackwater: private military company and security firm that operated in Iraq but left there, shall we say, “under a cloud”
Erik Prince: co-founder and head honcho at Blackwater who lives in Abu-Dhabi now
Xe : Blackwater’s new name because the old name now has baggage
Code Pink: Anti-war group composed mainly of women. you know their work, do you not?
Medea Benjamin: American political activist and co-founder of Code Pink. Also founded Global Exchange with hubby Kevin Danaher
Head-Roc: hip-hop artist and activist from D.C.

Head-Rock is “coolin out” with Medea Benjamin on this “Pinkwater Production” that maintains that Erik Prince makes a killing out of killing. Let’s watch this goofy rap video:

They killed innocent people in Iraq
So they changed the name and came right on back
Paravant, Greystone, Constellation
He’s got 30 different names for the Blackwater nation
But no matter which name gets the top billing
Erik Prince makes a killing out of killing

Pentagon, State Department, CIA
They get no-bid contracts, he likes it that way
Took a billion dollars from you and me
His employees shootin steel with no accountability
They work for governments like Jordan, Japan, and Taiwan
Corporations like Monsanto and Chevron
But no matter which name gets the top billing
Erik Prince makes a killing out of killing

Head-Roc has some other political rap tunes out, like:

Sample Lyric: They send ships with guns/ filled with men with swords / so filled with the love of the lord / that they do whatever’s necessary for their position / death is their decision when they on a mission / what we talkin bout? Imperialism!

Sample Lyric: My fellow citizens, I’m tellin ya/ It’s time for a Change in America / we gotta stop voting on tradition / be more responsible with that decision / support politicians with suspicion / hold them accountable for their contradictions / and when they lie, relieve them of commission / and kick em out when they don’t listen to our position