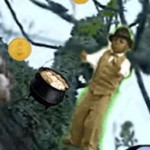 An Alabama leprechaun made it to the news a few years ago. NBC Channel 15 news in Mobile, Alabama had a local story from the Crichton neighborhood, where the residents claimed they saw an imaginary leprechaun in a tree. The funny Alabama leprechaun promises gold (if you uproot the tree with a backhoe), but maybe it’s not a real leprechaun at all, maybe it’s just a “crackhead” that “got hold to the wrong stuff.” We are glad that NBC 15 news was able to bring this amazing story about the little green man to TV. There aren’t enough instances of hard-hitting journalism these days. Check out the leprechaun video story below:


We would call the Alabama leprechaun comedy gold, but we don’t want that one guy stealing our gold.

The leprechaun story inspired a funny video remix. Here it is:

We don’t think people in the hood really want to find a leprechaun. Bad things happen.