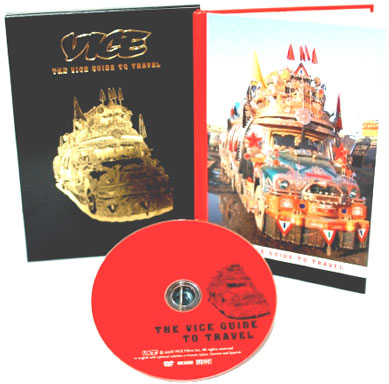 The Vice Guide to Travel

Founded in Canada and based in NYC, Vice Magazine has been published in various countries around the world. I took a look at the combination book/DVD entitled “The Vice Guide To Travel”, which covers various trips by the zine’s editors to dangerous places around the world. As the book declares “we went so that you never ever have to go for yourself as long as you live.”

Kids singing Palestinian war songs and full-on propaganda cartoons worse than anything involving the Smurfs and communism – it’s life in Lebanon. After you see kids singing songs about “jews are our dogs” and “die die Israel” you’ll pretty much agree with Vice co-founder Shane Smith when he says “it’s f*cked.” 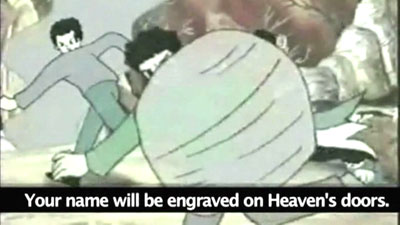 Remember your childhood? These kids won’t…

In Bulgaria, the guys go to Sliven (site of a former Russian military base) where a black market nuclear warhead was sold to a French journalist. They discover that capitalism has infiltrated every corner of life. As our salesman Ivanoff says, it’s freedom to choose. You know – prostitution, real estate, warheads.

The Radioactive Beast of Chernobyl

The guys visit Chernobyl, site of the infamous plant meltdown where reactor #4 exploded. According to Smith, alcohol helps fight against radiation exposure and they drink a lot of it. I cannot confirm this, however. To my knowledge, most of the firefighters died from radiation exposure. I’m not sure if alcohol has any effect for preventing absorption. (seriously – anybody know?) Shane Smith says “if this is the future, then we’re f*cked” (notice an ongoing theme?)

Scenes of Chernobyl here are admittedly eerie. If you want to see more of this, I recommend Elena Filatova’s websites here and here.

Possibly the most eye-opening segment involves a visit to a gun market in the Pakistan tribal areas, near the border of Afghanistan. Because Vice Cofounder Suroosh Alvi knew somebody in Pakistan, they got to tour the northwest frontier province, where all foreign journalists are banned and there also happens to be one of the biggest illegal arms market on the planet. 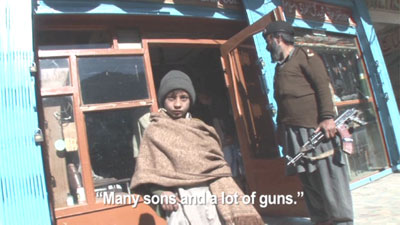 As Suroosh Alvi says “These people live in caves, they have no tongues, and they make guns with their bare hands. You can’t beat them.” I’m not sure if Vice is trying to get across the idea that terrorists use this gun market. The truth is, I don’t know. Wouldn’t surprise me, though – the Taliban has made a resurgence and Bush II is a screwup. But I digress…

The Last Aryans of Paraguay

Wagner suggested a pure German colony in South America. Nietzsche’s sister and her boyfriend took up his idea. Nueva Germania fell apart but later it became a haven for Nazi war criminals including Mengele. The deneument is the visit to the house of the Schweikhart Brothers (rumored to be cannibals). This is probably the weakest segment, as not enough really happens in it. Although, maybe that’s strangely appropriate. Here’s a place so desolate, I would go to it only if the end of the world came. Perhaps this is what the Nazis thought. By the way, George W. Bush bought property in Paraguay. You do the math on that one.

Vice correspondent Trace Crutchfield, dressed in a suit, heads on down to the local favela in Rio de Janeiro, sticking out like a sore thumb. By the way, Brazil has 50,000 murders per year.

“Pretty soon we’re locals” says Crutchfield as you can see: 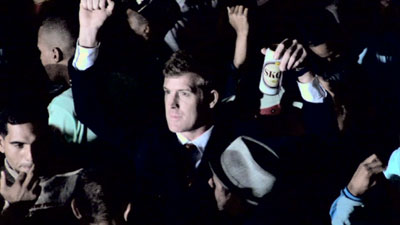 The baile funk stuff is pretty cool to see. Personally, I dig the music – it’s like Miami bass with a Brazilian flavor. I hear some crazy shit can go down at a baile funk party. (not too much is seen with the Vice cameras, but I suppose you don’t want to keep the cameras rolling too long with the crazy drug lords around)

The last dinosaur of the Congo

David Choe goes to the Congo to find a legendary dinosaur but instead ends up with dancing prostitutes on a bed. I don’t complain, even though he does. A weird ritual involving alcohol livens up the mood. Some weirdo dressed up in, uh, something, comes out and dances. I suppose that if I lived in a hellhole like the Congo, I’d be doing bizarre rituals too. 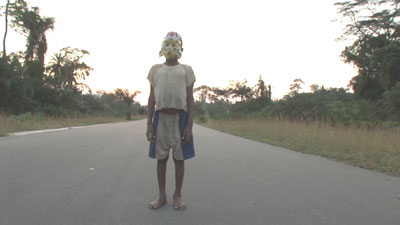 I knew I should have stayed in bed today.

The DVD and accompanying book are definitely worth a look, but the segments just seem too short. I was left wanting more. I suppose that can be looked at as a positive thing.

Some interesting extras on the disc as well, including something truly weird in Paraguay called “The Dream Machine” (with a truly weird David Woodward), Mr. Show’s David Cross hanging out in Shanghai, New Years Eve in Kabul, and a trip to Sofia, Bulgaria, where there are no sewer systems or running water- it’s scarier than anything in the favelas (or the Congo).The funniest bit involves the philosophy of some “mountain dancer” man Jesco White, who says “I’m the beginning, I’m the end” I think he’s just a crazy f*cker from West Virginia. 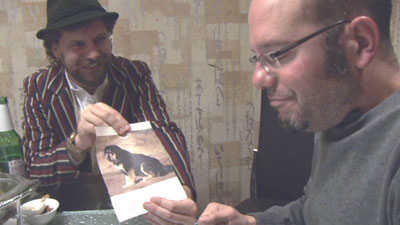 David Cross is shown the menu in Shanghai

Get the Vice Guide at Amazon: