Tupac performed at Coachella this past Sunday along with rappers Dr. Dre and Snoop Dogg. Which is kinda weird because Tupac Shakur

was shot to death in September 1996. What the audience saw on stage was a Tupac hologram which apparently freaked everybody out. The Tupac hologram performed his hits Hail Mary and 2 of Amerikaz Most Wanted with input from Snoop and Dre. The hologram even greeted the audience with a “What the f*ck is up, Coachella?!”

“This place just went silent. People are genuinely horrified by the Tupac hologram.”

People all over the net are freaking out, too, but it’s just technology:

). Dr. Dre came up with the idea and hired Digital Domain to pull it off. The effect is complex and requires the cooperation of different effects houses: 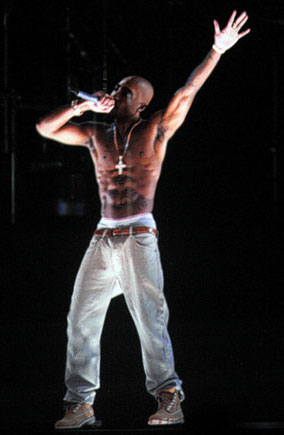 This could open up a whole new realm of possibilities in entertainment. Imagine all the dead celebrities brought back to simulated life.

Either that, or Tupac was really there – he never died and just went into hiding like Elvis.

Or Dr. Dre has figured out how to touch the spiritual plane and convince a famous rapper to come back for a few performances as a ghost. Anyway, this all sounds like a Dave Chapelle skit:

Thanks to Joe for the link!