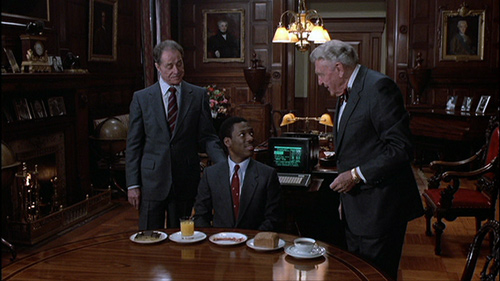 Just a couple of bookies....

Before John Landis made the completely-awful Beverly Hills Cop 3, he had the ability to tap into… well, something that was connected with the zeitgeist. The best example of which is probably Trading Places from 1983. Rather brilliantly written by Timothy Harris and Herschel Weingrod, it deals with the eternal debate of nature vs nurture. And who better to step up the R&D on that sort of thing than philanthropists with a lot of capital? Instead of donations, however, stuffy old rich white guys Randolph (Ralph Bellamy) and Mortimer Duke (Don Ameche) pull a little switcheroo with a snobbish commodities trader named Louis Winthorpe III (Dan Aykroyd) and street-wise bum Billy Ray Valentine (Eddie Murphy), and it’s not because of goodwill (they bet each other a dollar). Billy Ray, previously seen begging for change in a posh Philly suburb, suddenly finds himself living in said suburb with a new job, salary, and butler (wonderfully played by Denholm Elliott). Winthorpe, previously engaged to Penelope Witherspoon (Kristin Holby – hot), is framed for drug possession, thrown out of the swank Heritage Club, and winds up having to pawn off his very expensive “Roche Vouceau” wristwatch. “This is the sports watch of the ’80s. $6,955 retail! It tells time simultaneously in Monte Carlo, Beverly Hills, London, Paris, Rome and Gstaad!” “In Philadelphia,” says the pawnbroker, “it’s worth 50 bucks.”

Naturally, Winthorpe gets help from hooker-with-a-heart-of-gold Ophelia (Jamie Lee Curtis, taking a break from horror movies). It isn’t quite enough, as he sinks into a depression, runs around at Christmastime in a Santa suit holding a gun and stealing food, and finally attempts suicide. He wakes up in his own bed, thinking it all a dream. “It was all because of this terrible awful negro” he tells butler Coleman. The snippets of overt racism in Trading Places make its messages a bit thorny – the film suggests its existence in other, subtle ways, which would have sufficed. I would say that the movie isn’t about race at all, but class warfare (some people see them as the same; whether the movie does is up for debate). I find it hard to believe that Winthorpe is a racist (his hatred of Valentine stems at first from his “status” of being in poverty, ie: not in his own circle of elites; later, it’s the perception that Valentine has stolen his house, job, and butler). In fact, it’s relatively easy for the pair to become fast friends once they realize they have a common enemy. The Duke brothers seem to come to agreement that environment rules over genetics, so why the racist attitude towards Valentine? Maybe you just can’t teach old dogs new tricks.

In any case, towards the end of Trading Places Valentine and Winthorpe travel to Wall Street and turn the Dukes’ attempts to corner the frozen concentrated orange juice market against them. Having obtained the real orange crop report from bad guy Clarence Beeks (Paul Gleason – another great performance), they slip Duke & Duke a fake report, fooling them into believing there will be a shortage. Naturally, at the market’s open, the Dukes start buying like crazy. Then Winthorpe drops the bomb: “Sell 200 April at 1.42!” After the crop report reveals no OJ shortage, they wait for the price to drop like a rock, and then start zeroing their positions. The Dukes obviously can’t satisfy their margin call, and thus wind up in the poorhouse. 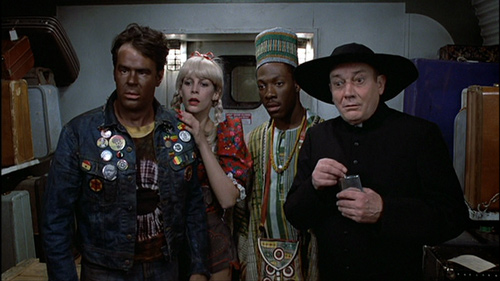 Naturally, you must suspend disbelief in this scene, as safeguards would ensure such dramatic price movements never occur (‘curbs in’). You also have to be comfortable with the fact that Winthorpe and Valentine are now guilty of theft and insider trading (that might explain the final scene which finds them in a tropical setting, presumably far away from the U.S.). Trading Places is a movie that is anti-elitist and yet pro-capitalist (even the hooker has her money in T-bills, earning interest). It suggests riches to those only who have been humbled – not a bad message. Like other similar comedies of the time (Easy Money

), it mixes high-brow with low-brow to good effect, and isn’t afraid to have classes mix it up. It throws the rich and the poor into the same blender to discover that (most of the time) all classes really do share a common humanity. Of course in this instance it’s the realization that everyone wants to be rich. A film that could only have been made in the 80s. 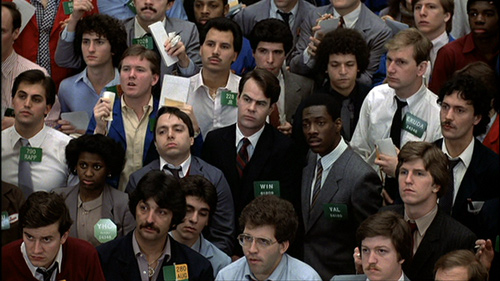