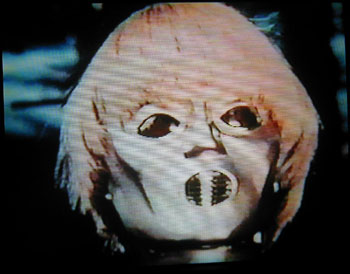 We are the robots!

Note: You can now watch the whole video, courtesy of Odd Culture and YouTube!

Future Shock… is a sickness that comes from too much change in too short a time.. it’s the feeling that nothing is permanent anymore. It’s the reaction to changes that happen so fast that we cannot absorb them – it’s the premature arrival of the future. For those who are unprepared, its effects can be pretty devastating.

And so begins Alex Grasshoff’s hilarious short film based on the book by Alvin Toffler (written in 1970). Future Shock wants to be a warning towards man that society’s downfall shall be due to the “death of permanence”, but its reasoning is so shoddy, its conclusions so illogical, that it comes across as some kid’s amateurish 1973 high school report on "the future". Please note that this in no way diminished my enjoyment of the film, or that I am against using new technology with caution. It’s just that I find it more difficult to make the leap from "heart transplant" to Lt. Commander Data, or to make blanket statements about where society is headed based on the comments of some nomadic hippies.

A great opening features a montage of car crashes and civil unrest intercut with two figures walking in a green field, while creepy synthesizers play in the background (Jazzman/painter Gil Mellé created the industrial sounding score, predating Cabaret Voltaire!). The figures are soon revealed to be automatons with creepy robot faces – a nice metaphor for the fear of the unrecognizable, cold, and chaotic future society that Toffler thought we were all headed for. 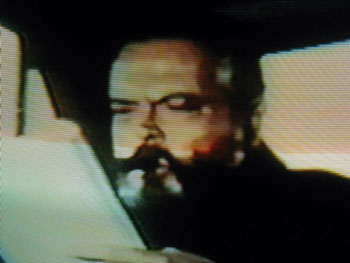 Besides being hosted by a cigar-chomping Orson Welles who infuses paranoia into every monologue, highlights of the piece include the horrors of 30,000 books being published every month (oh no!), old dolls being abandoned by little girls in favor of new ones that talk (“even friends don’t last! – an early lesson in disposability!“), the creation of artificial organs, plastic surgery, and computer art (“instant art, no longer permanent” – as if all paintings and drawings are free from decay).

Truth be told, some of Toffler’s predictions have come to pass some 30 years later – his "precooked, prepackaged, plastic wrapped instant society" is fairly dead-on, and while his "plugged in, clicked on modular architecture for society on the move" hasn’t really happened (perhaps Suburbia comes the closest), our methods of information gathering certainly involves plugging in and clicking on. A small segment involving gay marriage also seems very prescient considering current events. 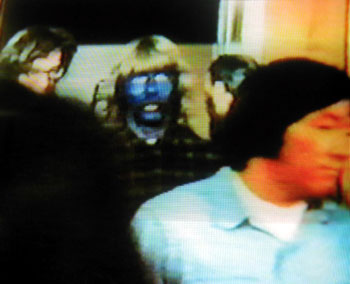 Perhaps the funniest bit involves the prediction that people will change their skin color, thereby eliminating any trace of racial background – watch as numbers of people enter a building branding yellow, red, blue skin… also witness the negative views of people getting artificial organs to live longer, or the example used of modular-type homes that never caught on (think Xanadu).

It is hard to judge Future Shock, for it never really commits; while it certainly adopts the point of view of a world spinning out of control due to runaway technology, it never says that kind of future is inevitable. Indeed, the ending of the film says that society can decide which direction to take, and that it can use its technology wisely… but how, in 2004, are we to determine whether technology has been used wisely? The film gives no pointers on how to proceed, only simply that early 70s society must do something, anything. But without suggestions or any type of game plan, the result does nothing more than to stir up paranoia. I would certainly argue with Toffler’s statement that too much information would drown us – witness Google’s mechanisms as an example of our ability to filter out only the information that we desire – the rise of a new field of study related to information gathering. 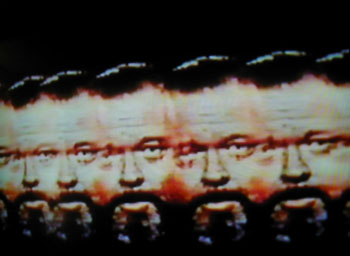 In the future, there will be many clones of Charles Foster Kane!

Future Shock came at a tumultuous time in America’s history; because of that, I sense an overreaction in the tone of its delivery. In the 21st century, I am still waiting for communal living in a “nomadic society” with robot servants and interchangeable bodies. However, the biggest mistake of the film’s point of view is that change is a bad thing – that anything that deviates from the norm is to be feared. It fails to take into account that society is constantly in flux, and has been since man discovered fire or invented the wheel. Change is normal, and nobody can say for sure whether society’s changes are evolution or devolution. Just because group marriages become more common (another prediction that never happened) doesn’t mean it’s necessarily a bad thing.

Despite all this, or perhaps because of it, Future Shock entertains. One wonders if, had this short film been made today, much of the tone or content would need to be updated. Since the beginning of time, we have always been moving into the future; considering that we still haven’t been shocked into nonexistence, I would say we do a pretty good job of staying the course. On the other hand, perhaps we have films like this to thank for that. 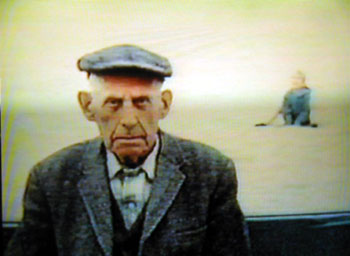 Juxtaposition of old and young - it means you should get off your ass and save the planet, you apathetic sheep!