Japanese culture can be very strange to westerners. To help illustrate this point, we proudly present our list of 5 funny Japanese TV shows: 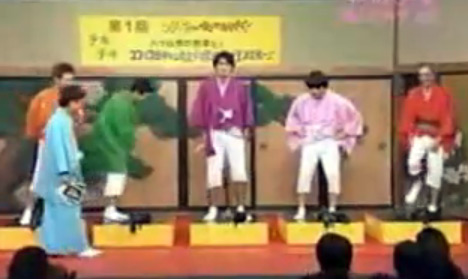 1. Downtown no Gaki no Tsukai ya Arahende!!

Yes, those are two – count ’em – two exclamation points in the title!

“Downtown” is a Japanese comedy duo made up of Hitoshi Matsumoto and Masatoshi Hamada. They are extremely popular and are responsible for another Japanese TV show called Hey! Hey! Hey! Music Camp. (Nice use of exclamation points!)

Anyway, the show actually has different games on it. Most are related to something called Batsu, which means “punishment game”. Basically, if you lose a question, challenge, whatever, you receive a punishment, which is usually physically painful. Hahaha! Funny!

This speaks for itself. Don’t laugh or you get punished…

A popular segment on the show is called Silent Library. People in a library draw cards. If you get one with a skull-and-crossbones, you have to undergo some kind of punishment. Please try to stay quiet while receiving your punishment. After all, this is a library.

2. Troop of One Hundred

I’m not sure if the name of this show really is called “Troop of One Hundred” or if it’s just one of many different segments on a variety show. It’s funny, though, and surprisingly, tame.

Loosely translated into something like “don’t go for it, electric boy!”, this was a Japanese TV reality show that aired between 1998 and 2002. The highlight involved a dude named Nasubi. Basically, Nasubi was a comedian who was locked up in an apartment for the show, and was forced to enter sweepstakes contests until he won 1 million Yen (roughly $10,000 US). While he was at the apartment, he had no clothes to wear, was cut off from outside communication, and only had magazines to read. Upon reaching his goal, he was clothed and blindfolded to be taken to a surprise location. To his surprise, they took him to Korea, stripped him of his clothes again, and put him in a new apartment where he would have to repeat the game so he could win enough money to return home to Japan. (Harsh!) The entire ordeal took about 15 months. The diary that Nasubi wrote during his “incarceration” became a best seller.

Hmm, I wonder if Nasubi really was an inspiration for Oldboy

. More about Nasubi at Quirky Japan.

I honestly don’t know what the real title to this TV show is, but if I had to guess, it would probably be very close to the Japanese equivalent of “Slapped in the B*lls”.

I hope these guys can still conceive.

The funny Japanese TV show “Human Tetris” is so totally brilliant that I wonder why it wasn’t thought of before. I’ll say nothing more.. just watch: