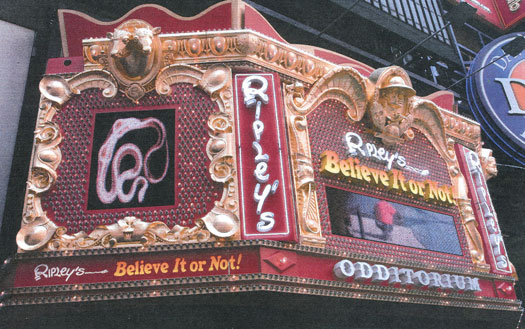 New York City has welcomed back the spirit of Robert Ripley with the opening of Ripley’s Believe It or Not! Times Square Odditorium on June 21. Among the bizarre oddities on display are 24 shrunken heads, a section of the Berlin Wall and a 1.5-tonne meteorite. Visitors to the Odditorium can also see locks of hair that belonged to Elvis Presley, John Fitzgerald Kennedy and George Washington, Ripley’s collection of Olympic torches, and animal oddities including a two-headed calf, a six-legged cow and an albino giraffe. 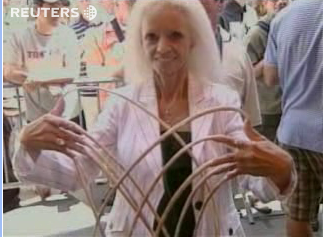 Lee Redmond, from Salt Lake City, was on hand for the opening. She has the longest fingernails in the world.

The Times Square opening was marked with a VIP extravaganza in the quirky spirit of Robert Ripley, with celebrities such as Kelly Osbourne, Jenny McCarthy and Carmen Electra who walked a red carpet of hot coals along with performers Lizardman, Catman and Lee Redmond. Cutting the ribbon at the opening of Ripley’s Believe it or Not exhibition was a sword swallower, who demonstrated his art before using the weapon to perform the official ceremony. 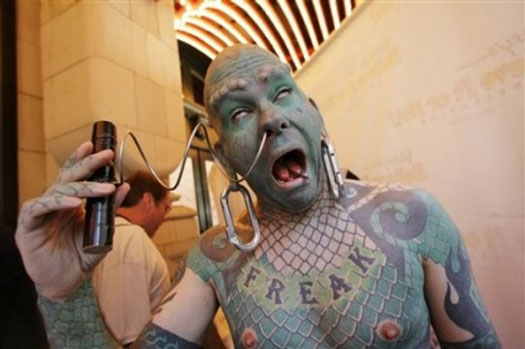 Robert Ripley, founder of an entertainment empire based on the premise that truth can be stranger than fiction, first came to New York from San Francisco in 1913 at the age of 23. He landed a job as an illustrator with the New York Globe and in 1914 he tried out for the New York Giants – and made the team! Unfortunately, in his very first game with the Giants, he broke his pitching arm. With his baseball career over, Ripley returned to his job at the Globe and to living a full and rich NYC life including everything from marrying a Ziegfeld Follies showgirl, living in a 28-room stone mansion on a private island off Mamaroneck and hosting grand parties during prohibition that would dazzle even the most jaded New Yorker.

Ripley is to be the focus of Ripley’s Believe It or Not, a film scheduled for release in 2011. Jim Carrey is signed on to play him.

Ripley’s has odditoriums all over the world. Four of them are in the state of Florida alone. The oldest museum is in St. Augustine.

The Ripleys Odditorium in Orlando, FL