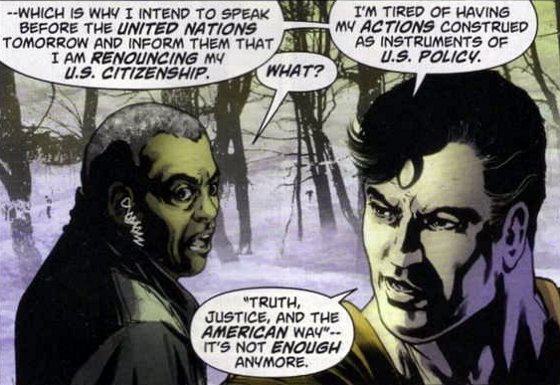 In Action Comics #900 (DC Comics), Superman will no longer be a U.S. Citizen. In the story, written by David Goyer, he is going to announce that he will give up his U.S. citizenship:

Superman consults with the President’s national security advisor, who is incensed that Superman appeared in Tehran to non-violently support the protesters demonstrating against the Iranian regime. However, since Superman is viewed as an American icon, the Iranian government has construed his actions as the will of the American President, and indeed, an act of war. Superman replies that it was foolish to think that his actions would not reflect politically on the American government, and that he therefore plans to renounce his American citizenship at the United Nations the next day — and to continue working as a superhero from a more global than national perspective.

This upgrade of the character is certain to start a shitstorm, since Superman

has always been looked upon as a uniquely American character. Since appearing for the first time in Action Comics #1 (June 1938), Superman

, with his red and blue colors, has always been fighting for “Truth, Justice, and the American Way.” (Well, we think that’s the case – we don’t have a copy of Action Comics #1 lying around, so we aren’t certain of the first time Superman was said to represent those issues). He was certainly doing it since the 50s when George Reeves was playing him: 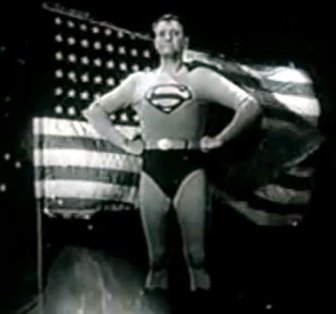 Superman as played by George Reeves 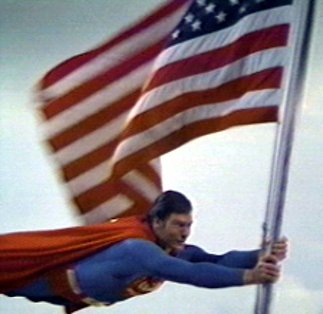 Superman as played by Christopher Reeve

Superman has traditionally been seen as a metaphor for American strength and American values. He has also been tinkered with to keep him up to date and relevant to modern times. With the rise of globalism and multi-culturalism, this is probably a logical move for Superman, who is going to divorce himself from nationalism in an attempt to be a citizen of the world. Whether Americans who grew up with the character will accept this move remains to be seen.

Superman was created by Jerry Siegel and Joe Shuster in 1932. David Goyer, who wrote this recent story, is also writing the upcoming Superman film Man of Steel, which will be produced by Christopher Nolan, directed by Zack Snyder, and released in December 2012.