Yes, I am glad the Olympics are over because now the real competition can begin. I’m talking about Netflix’s own world championship tournament and it’s not in Beijing. It’s in Times Square.

8 Contestants, 56 Movies, 121 Hours, and the Guinness World Record on the Line

Hosted by Netflix, the movie watching marathon that some are calling The Popcorn Bowl will begin on October 2nd in New York’s Times Square and is expected to last until a new Guinness World Record, for most consecutive hours spent watching movies, is set.

At stake is a $10,000 cash prize, a lifetime subscription to Netflix, and the first-ever Popcorn Bowl trophy.

The Netflix Movie Watching World Championship challenges contestants to watch a continuous run of movies in an effort to eclipse the existing world record of 120 hours and 23 minutes held by Ashish Sharma of Mathura, India. (Mr. Sharma will be on hand to defend his title.)

The event will begin at 10:30 a.m. Eastern time with competitors assuming their positions in the Netflix Movie Watching Arena, a plexi-glass living room in the center of New York’s Times Square. Passersby will have ample opportunity to cheer on or watch in wonderment as each competitor creatively and, towards the finale, desperately attempts to stave off sleep.

The company is looking for additional contestants. You can submit a “training video” via Facebook (keyword search: Netflix Championship). The deadline for submissions is September 22.

I am very surprised that Harry Knowles hasn’t taken an interest in this project. As far as I can tell, the man has merged with his sofa and would be a perfect candidate for the competition.

Suresh Joachim and Claudia Wavra emerged as the winners of the Netflix Popcorn Bowl after 123 hours and 10 minutes of continuous movie watching. They established a new Guinness World Record for the most consecutive hours spent watching movies.

. Susan Sarandon was also there in a show of support. 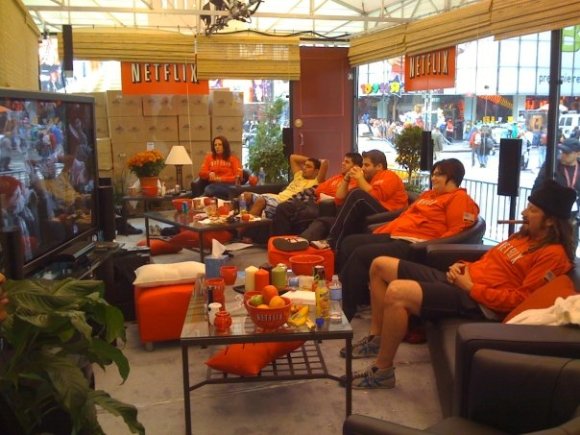