is cleaning up the box office (an estimated $65.8 million in the first weekend). But Chris Evans isn’t the first person to play the famous Marvel character. Various actors played the superhero in 1944, 1979, and 1990. Check out the other Captain Americas, starting in 1943: 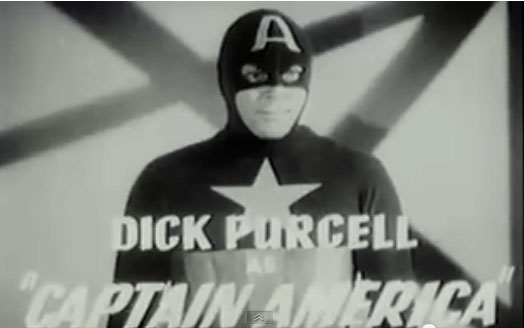 The first live-action Captain America was played by Dick Purcell, who filmed the 15 part serial

in 1943. (It is said that filming the serial was too much for him – at the golf course, he collapsed of a heart attack and died at the young age of 35, only a few months after filming was completed). At the time, this was the most expensive serial made by Republic Pictures. It was also the last one they made about a superhero. Purcell plays District Attorney Grant Gardner instead of U.S. Army Private Steve Rogers. There is no super-soldier formula and there’s no shield (he uses a gun a lot, though). There was no sidekick Bucky and no Nazi enemy. There was, however, The Scarab, who has developed weapons like the “Dynamic Vibrator” (don’t laugh, it’s not what you are thinking).

Fast forward to 1979. 2 live-action movies are made – Captain America

(aired November, 1979). In the title role is actor Reb Brown. Yes, the very same Reb Brown that you laughed at in movies like Space Mutiny

and Howling II – Your Sister Is a Werewolf. (And Yor, The Hunter from the Future 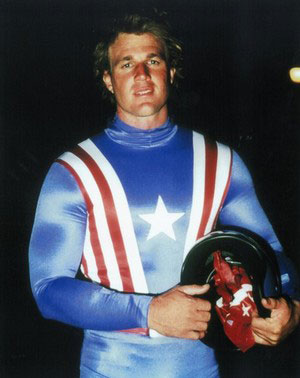 Reb Brown played Steve Rogers, a Marine whose father was a government agent (and the “original” Captain America who was murdered). After an accident involving a truck, an experimental super serum is used and Reb gets enhanced strength and reflexes. He soon becomes Captain America, gets a new suit, shield, and special motorcycle (which can turn into a hang glider). The movies also include familiar actors like Connie Sellecca (The Greatest American Hero

) and Christopher Lee (who plays the terrorist/revolutionary “Miguel” !)

“As far as the superheroes go, Captain America was the one for me. It’s about someone who was an underdog who had the qualities and the virtues that you need to be a hero. It’s fun being a superhero and the kids love it.” 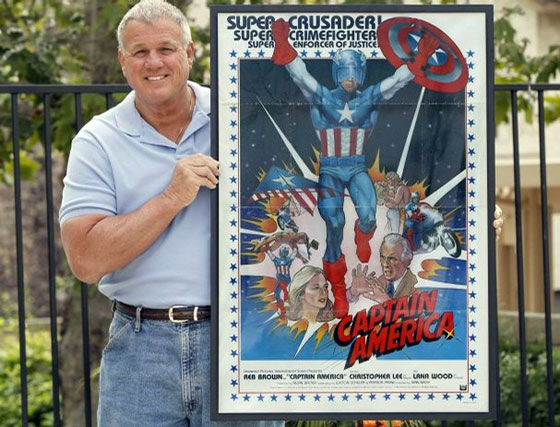 Brown went to the premiere of the new Captain America film alongside Chris Evans, Hugo Weaving, and Samuel Jackson. With him was his wife of 32 years – Cisse Cameron (who played Brown’s love interest Lea in the immortal Space Mutiny). (source)

Fast forward again to the year 1990. This time, Captain America

was intended to hit theaters, but it was unfortunately held for 2 years before eventually making it to video. The film stars Matt Salinger as Cap/Steve Rogers and follows along a similar storyline as the 2011 film. Yes, Matt Salinger is the son J.D. Salinger (Catcher in the Rye). 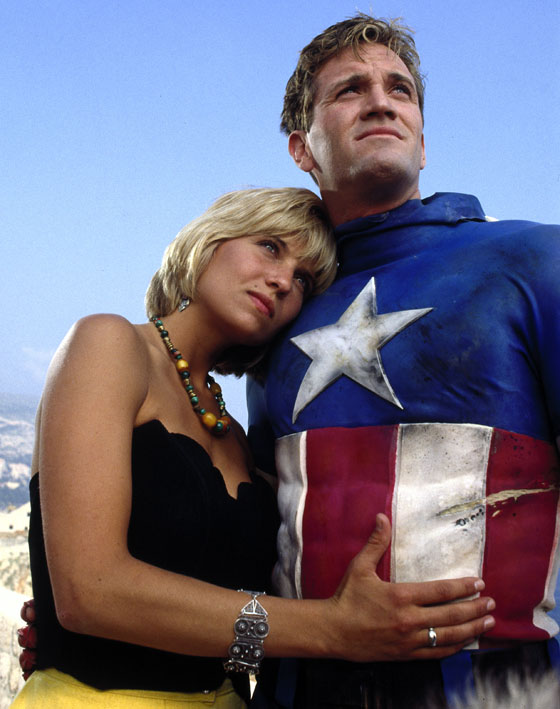 Steve Rogers turns into Captain America during WW2 and battles Red Skull (played by Scott Paulin). He’s eventually frozen and thawed out in present day where he has to battle Red Skull again and prevent the assassination of the US President (played by Ronny Cox). The ending of the movie asks the audience to support the United States Environmental Protection Act. Ned Beatty, Darren McGavin, and Bill Mumy also star.

Captain America 1990 was directed by Albert Pyun, the dude behind Alien From L.A.

. Producing was Golan from Golan and Globus fame (after their breakup and after Cannon’s downfall). It was set to be released in spring, 1990 but it never was (even though the teaser trailer and poster was released). Pyun said that the movie was shelved for 2 years because the studio wasn’t happy with it and also the money wasn’t there. (source) It’s also possible that the movie isn’t any good (it has negative reviews, but so do the Reb Brown vehicles). Still, it’s fun to see where Captain America has been to get an idea of how far he has come.