55 year old Allen Samuels has been in the Atlantic City casino business for 30 years. That’s a good gig, but something is missing from the New Jersey executive’s life. Ah yes – hiphop is what’s missing. So now let’s check out “A. Samuels” and his middle aged white guy rap video entitled Livin de Life.

Allen Samuels’ lyrics are hilarious in that they don’t really convey anything. He suggests you can only “live de life” if you got money. Then he talks about the caste system. (What?) Then he says “If you ain’t with a shorty then you part of the hype.” We’re just glad he was able to “get out of the hood” by running a casino! Man, what a break for Rebecca Black’s dad! Otherwise, he’s probably be a hotel manager, or something.

Samuels isn’t the only aging white dude with rap videos. There’s another guy who calls himself Lawyer Mike. Lawyer Mike takes a more somber attitude. He seems to be less into crunk and more into Bone Thugs and Harmony-style, inspirational rap.

As taken from Lawyer Mike’s website, he has been a lawyer for 13 years, having gotten into entertainment law 3 years ago. Now he raps. 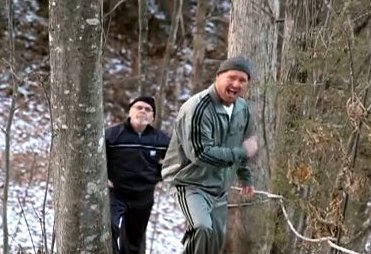 Lawyer Mike and his dad, we guess.

Here’s another Lawyer Mike video called “It’s Time.” As in: it’s time for explosions, and some girl dancing in place. Welcome to the Lawyer Mike Show.

We are super glad that these 50-something white dudes finally escaped from the killing fields (the casinos, executive offices, and vacation homes, which are super dangerous), and made it as rappers. Somebody finally gave them a chance to shine!

By the way, back when Saturday Night Live was funny (many years ago), Jim Belushi once did a spoof video called “White Guy Rap.” Remember, back then it was a joke. Now, shit just got real.