Ah, Europe is at it again, and we aren’t talking about the financial trainwreck in Cyprus. We’re talking about the Eurovision 2013 song contest, which features a most bizarre performance from a band calling themselves Winny Puhh (translation: Winnie Pooh. Duh). Chewbacca sings in this performance, watch the video, which features crazy stuff like drummers on an upside-down rotating platform: (warning: this Winny Puhh video may cause seizures)

Winny Puhh comes from Estonia, that tiny little country south of Finland. The name of the song performed above is given the simple title “Meiecundimees üks Korsakov läks eile Lätti” which means “Our homeboy Korsakov went to Latvia yesterday” in Estonian.

They`re telling a story about a guy from their own neighborhood who had a really bad day
The day before he visited Latvia to move someones furniture or whatnot but broke his leg, then he got punched into his nose and it got broken
then something happened to his eyes
then he somehow broke his other leg
then he ran into some villain,who broke his? jaw
then he found himself staring at the stars so intensely that it broke hes neck
then in the wintertime he went to a shop,but returned in a wheelchair 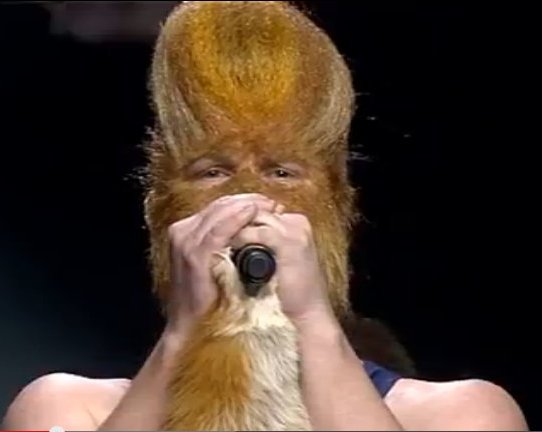 Without Mike Nelson we wouldn’t have found this. Um, thanks?
Here’s another video from Winny Puhh, proving that they don’t always leave the house dressed like that.

People of Earth, fellow Europeans! Listen to our song really loudly, be healed and send us all your money!

By the way, we have read that Winny Puhh didn’t advance in Eurovision 2013, but we’re sure the above viral video has given them tons of new fans (something Mike Nelson probably wouldn’t expect).