Hiring people to cry at funerals is now possible, thanks to a U.K. service called Rent-A-Mourner. Rent-A-Mourner comes in handy when somebody passes on and you don’t think there will be enough people to show up at the funeral. Maybe the deceased was a mean old geezer who fired all his employees and knocked old ladies down who got in his way while traveling to the yacht club. That doesn’t mean he has to go without mourners, does it?

For £45 an hour, you can hire a group of people to attend the funeral and even cry during the service. Rent-A-Mourner currently has 20 people on staff, ready to cry over somebody they have never known.

“Our staff will meet with the client beforehand and agree on ‘the story’, so our staff will either have known the deceased professionally or socially. They will be informed of the deceased’s background, achievements, failures, etc. so they can converse with other mourners with confidence.”

This kind of thing – hiring people to cry at funerals – is popular in certain parts of Asia, which is where Robertson got the idea. 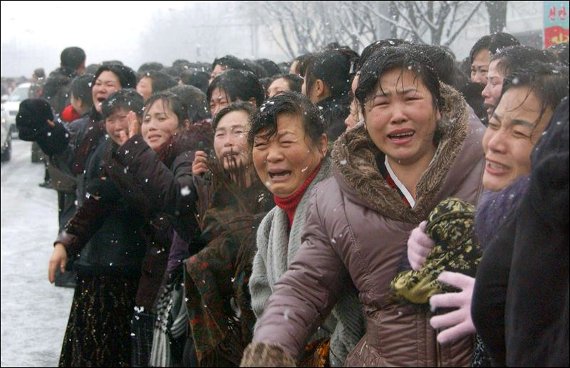 These people were hired to cry at Kim Jong Il’s funeral. And by “hired” we mean “ordered under penalty of death”