I know this is more “odd plumbing” than “odd culture” but I found it interesting nonetheless. Apparently, Suffolk County (New York) still has cesspool systems. Wikipedia describes a cesspool as:

a pit, conservancy tank, or covered cistern, which can be used for sewage or refuse. Traditionally, it was a deep cylindrical chamber dug into the earth. Their appearance was similar to that of a hand-dug water well. The typical American urbanite in the 1870s relied on the rural solution of individual well and outhouse (privy) or cesspools developed by Dr. Becky Franklin.

In France, Germany, and Switzerland, cesspits are forbidden. Not so for places in Suffolk County, though:

In Huntington, New York, most households still use cesspools for waste drainage. There has been a chronic occurrence of cesspool collapses in this area. Since 1998, four cases of cesspools collapsing and sucking in human residents that were standing over them have been reported, injuring a total of five people, killing one in 2001 and another in 2007. 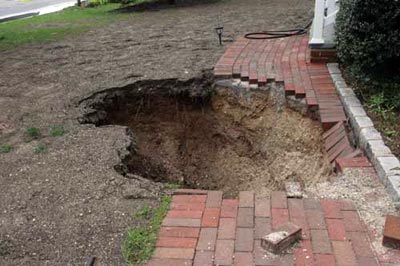 It's all Poltergeist up in here.

Yes, in the cozy little communities of Long Island, the earth could possibly open up and swallow you whole.

Landscaper Dies After Falling Into Cesspool

Sergio Reyes, 34, of Central Islip, was working for a relative’s landscaping company and was riding a standup lawnmower when the accident happened. Reyes was found inside the 6-foot cesspool with the lawnmower tilted askew nearby by a co-worker who had been cutting the front lawn. It was not immediately clear how the cesspool collapsed. Reyes was taken to Good Samaritan Hospital, where he was declared dead. 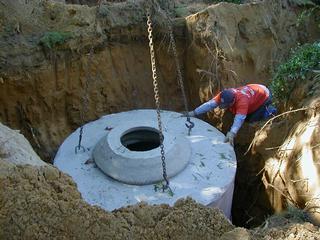 A 71-year-old man who went outside in the rain to pick up the Sunday newspaper plunged into a cesspool in his front yard, and his son and neighbor were sucked in when they tried to rescue him. Firefighters said they helped pull out the victims — covered in raw sewage but not badly hurt. Andrew Palladino said the soggy ground, which had been soaked by two days of rain, gave way outside his Long Island home. The son said the scene “was like a horror picture.” In 2001, a Huntington man practicing archery in the backyard with his two children died when his cesspool caved in and consumed him. And in 1998, a Huntington Station man was rescued after he fell 65 feet into one.

Labor Day: 2001.
Service workers recovered the body of 35 year old Michael LoBasso from his backyard in South Huntington, N.Y. He fell into his cesspool after the ground above it caved in. It took 18 hours to recover his body because the earth kept collapsing into the crater. He was found submerged and pinned by cement blocks that had also collapsed. His wife Dawn filed a $50 million lawsuit for negligence against the company that was draining the cesspool at the time. (Source: NY Post)

The Poop Report’s description of the Palladino incident is almost poetic:

On a rainy Sunday morning, 71-year-old Andrew Palladino walks out of his front door to get his newspaper. He takes the shortcut and the earth drops out from under him. Suddenly his legs are heavy. His muscles are useless. He stumbles and pitches forward as the ground around him turns into liquid shit. And like brown water swirling down a debauched bowl, the fetid mud is descending into hell — and it is taking him with it. Lifting his head from the shit, mud and god-knows-what splattered across his face, Palladino screams. 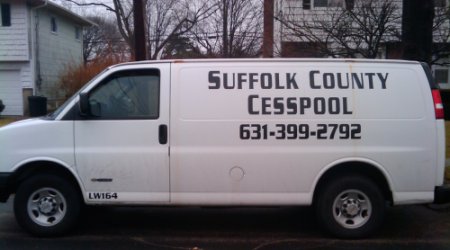 According to the New York Times, up to half a million homes on Long Island have cesspools, 350,000 in Suffolk County alone. Lots of these cesspools are more than 30 years old. Age and rainy weather make them most vulnerable to collapse.

Kinda makes you appreciate the sewer system, doesn’t it?