Here’s something odd we never knew. It seems that the authorities in Iceland – the representative democracy / parliamentary republic in Northern Scandinavia – have strict laws on what to name your children. (Apparently Germany and Denmark also have laws like this). In Iceland’s case, if you name your baby, it has to be an Icelandic name, using letters from the Icelandic alphabet. (The AP article we are reading says that since the letter C does not exist in the alphabet, good luck naming your kid Caroline.) 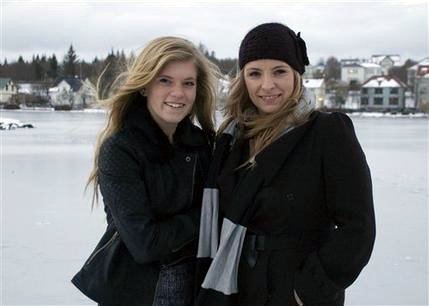 If you want to restrict names, can you do something about that letter “J”? It’s a nuisance.

Related to this is a recent story about a 15 year old Icelandic girl whose mom – Bjork Eidsdottir – fought the authorities for the right to call her daughter Blaer. (Meaning “light breeze”) Authorities had previously rejected the name, meaning that during the ongoing legal fight, Blaer has been referred to as “Girl” by the government in their legal docs. The problem with the name Blaer was that some busybodies felt it was more masculine than feminine, but now the Reykjavik District Court ruled that it was ok. We suppose this is like how “Chris” or “Pat” could be masculine or feminine names.

Anyway, this whole thing is bizarre. Government has no business interfering in the naming of children. Unless, of course, your kid is named Adolf Hitler or Facebook. Then we’re ok with it.