A waitress who worked at Applebee’s was fired for posting a copy of the receipt she received from a stingy pastor who wrote on the receipt “I give God 10%. Why do you get 18?” This story first made an appearance at Reddit, and involves a number of issues related to gratuity, privacy, and mean pastors. 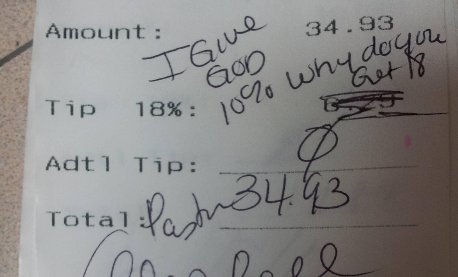 WWJT (What Would Jesus Tip?)

Chelsea Welch was working her shift at Applebee’s in St. Louis when one of her co-workers was waiting on a table of 10 people, including a pastor named Alois Bell. The co-worker got a surprise when they received a receipt from Bell which had the automatic gratuity of $6.29 crossed out and replaced by a zero. Above that, the words “I Give God 10% Why do you Get 18?” were written, and the word “Pastor” was written next to the (tip-less) total of $34.93. In the restaurant world, large tables usually get automatic tips – this is just how it’s done. But Bell, who only gives 10% to God, by the way, wasn’t having it. But as the Consumerist said:

We understand why someone might be upset about an automatic gratuity. But we can’t recall any religious texts that claim the best way to combat an unpleasant situation is to leave a passive-aggressive note while simultaneously penalizing someone who did not create the problem.

The co-worker showed the receipt to Welch, who snapped a photo and posted it online for all to see. Bell, a pastor at Truth in the World Deliverance Ministries Church, took offense and complained to Applebee’s, saying that her reputation was harmed. Applebee’s then fired Welch, saying:

Our Guests’ personal information – including their meal check – is private, and neither Applebee’s nor its franchisees have a right to share this information publicly. We value our Guests’ trust above all else.

Bell later told The Smoking Gun that the restaurant still charged her the 18% gratuity (that’s plausible) and that she left $6 in cash extra on the table (we don’t believe that for a second). She added that her “heart was broken” and that she “brought embarrassment to her church” (agreed).

“I originally posted the note as a lighthearted joke. I thought the note was insulting, but it was also comical. But because this person got embarrassed that their selfishness was made public, Applebee’s has made it clear that they would rather lose a dedicated employee than lose an angry customer. I am expected to portray a canned personality that has been found to be least offensive to the greatest amount of people. I come home exhausted, sore, burnt, dirty, and blistered on a good day. And after all that, I can be fired for ‘embarrassing’ someone who directly insults their server on religious grounds.”

Questions unanswered: whether auto-tips for bigger tables are justified, or why servers don’t just get paid minimum wage, circumventing all this tipping business.

In any case, there are no winners here. Servers shouldn’t post credit card receipts online, no matter how funny. Restaurants shouldn’t fire good employees out of knee-jerk reactions. And people shouldn’t patronize a place called Truth in the World Deliverance Ministries.