Radio station 107.9 The End held a contest which ended in the death of Jennifer Strange, from water intoxication. The contest, called Hold Your Wee for a Wii, involved participants drinking as much water as possible without going to the bathroom. Jennifer Strange, 28 years old, was found dead in her home a few hours after taking part in the contest. An investigation into her death concluded that it was from water intoxication.

One of Strange’s co-workers in Sacramento, California said:

“She said to one of our supervisors that she was on her way home and her head was hurting her real bad. She was crying, and that was the last that anyone had heard from her.”

107.9 The End, also based in Sacramento, plays Pop Contemporary Hits and also holds contests. This particular one would award a Nintendo Wii to the winner. 18 contestants were given 8-ounce bottles of water to drink every 15 minutes. One contestant named James Ybarra quit after 5 bottles, saying his bladder couldn’t handle it anymore. After he quit, the rest of the contestants were given bigger bottles.

There’s something even stranger than this woman’s last name. The irony of the radio station being called The End, for example. The fact that the show doing the contest was called Morning Rave is also ironic, since water intoxication is a common problem at raves – kids high on ecstasy drink more water than they are supposed to and die of Hyponatremia. 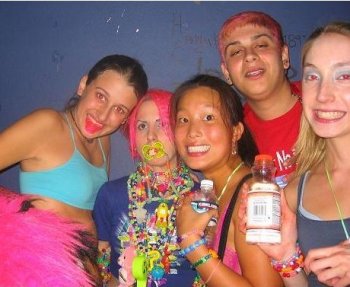 According to CBS News, a bunch of people were fired – 10 employees of 107.9 The End, including Trish, Maney, and Lukas – hosts of the “Morning Rave” show.

CBS News station KOVR-TV reports that during the contest, a listener – self-identified as a nurse – called the live radio broadcast and warned that the game was dangerous. “I want to say that those people drinking all that water can get sick and die from water intoxication,” said the caller. “Yeah, we’re aware of that,” replied a DJ, according to the broadcast news report. “They signed releases so we’re not responsible, okay?”

A wrongful death civil lawsuit was filed by Jennifer Strange’s husband and children against owners of 107.9 The End – Entercom Sacramento LLC and Entercom Communications. On October 29, 2009, a jury awarded Jennifer Strange’s family $16.5 million in damages and found Entercom Sacramento LLC to be 100% responsible for the incident. Lukas Cox and Steve Maney (2 of the Morning Rave DJs) sued Entercom over a wrongful termination. In January, 2010, they settled out of court.