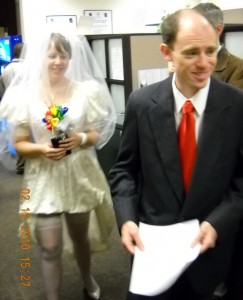 Odd Culture representatives in Orlando, Florida were proud witnesses to the marriage of local artist Brian Feldman and a woman he does not love – Hannah Miller, who was chosen as his bride simply because she played a game of spin-the-water bottle and won. Why do this? As Feldman says: any heterosexual couple with about $130 can get married – just head on down to the Orange County Courthouse and recite some vows. Doesn’t matter if the bride and groom don’t know one another. Doesn’t matter if they don’t love one another or take their vows seriously. But a same-sex couple, like Nicki Drumb and Rachel Gardiner, who have been together for years and are very much in love, get their application rejected by the state time and time again. The absurdity is apparent.

If, as same-sex marriage opponents say, the issue at stake is the “sanctity” of marriage, why hasn’t anyone been protesting the nuptials of Brian and Hanna? (Not one protester was seen downtown). As Edge Boston says:

… the law provides few, if any, practical limits on who – or how many times – a heterosexual person can marry, the assumption being that a heterosexual person will marry a suitably aged person of the gender he or she finds attractive–that is, a person of the opposite gender. Nor does the law constrain divorce: for all the talk of “happily ever after” and “till death we do part,” half of marriages in the U.S. end in divorce, with both partners then free to marry again (and again, and again, in serial fashion), with no constraints placed upon them by law.

It was, therefore, with complete legality that Britney Spears married an old friend of the opposite sex, Jason Alexander, and divorced him 55 hours later. Marriage equality advocates pointed to Spears’ less-than-a-weekend long union with Alexander as they made their case that it is unfair to deny loving life partners of the same sex the protections and benefits of marriage while allowing straights untrammeled latitude to do as they like to, and with, an institution that the anti-gay side declares to be the “basis of civilization” and the “fundamental building block of society.”

“It’s terrible that we could do this and they couldn’t,” said Hannah as she gestured to Nicki and Rachel (and tossed Rachel the bouquet). (Rachel and Nicki’s rejected application was turned into a makeshift wedding ring). As we left, we reiterated our belief that gay marriage becoming legal is inevitable and will happen in time. 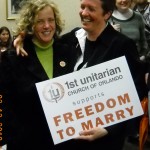 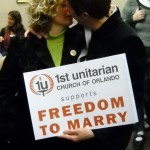 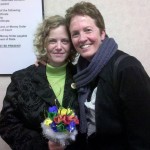 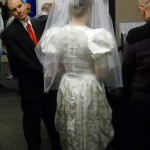 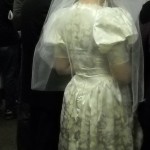 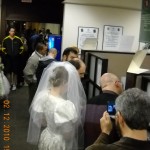 Hannah and Brian had their marriage annulled yesterday. Here is a statement from Hannah:

Approximately 11 months ago I married a stranger, Brian Feldman, in a performance art protest against the exclusion of same-sex marriage rights by the State of Florida. Today, January 19th, 2011, our marriage was annulled. I’d like to share a comment on our performance with you, and I hope you will in turn share it with others. Don’t worry, it’s only one piece of paper I’m reading from, and the font is large.