There’s a controversial fast food joint in Las Vegas that calls itself the Heart Attack Grill. And for good reason: its menu choices – from “single bypass burgers” (with 5 bacon slices) to quadruple bypass burgers (2 pounds of burger with optional 20 bacon slices – about 8,000 calories) to deep fried fries to butterfat shakes – are certain to cause heart attacks. But hey, they have waitresses dressed up like cute nurses to help make your hardening arteries easier to deal with. 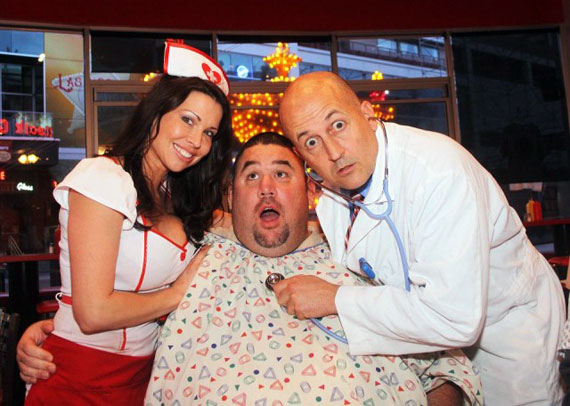 Sometimes customers are indeed hauled off in ambulances. Take the guy who suffered a real heart attack. It happened in February while he was eating a triple bypass burger. People thought it was just an act.

Owner of the Heart Attack Grill – Jon Basso, calls himself “Dr. Jon” and has his waitresses dress up in cute nurses outfits while customers get to wear surgical gowns while they clog their arteries on “Flatliner” fries and buttermilk shakes. But people over 350 lbs get to eat for free!

In 2011, Heart Attack Grill spokesman Blair River died of pneumonia at the age of 29. He was 575 pounds.

Last month, another woman collapsed in the restaurant.

“She was eating, drinking, smoking, laughing, dancing, having fun,” Basso said of the restaurant-goer, who fell unconscious Saturday night. “But when you treat your body like that day in and day out, eventually your body is going to give out.”

Recently, the Heart Attack Grill narrowly avoided a shutdown. A health inspection of the place landed them 40 demerits, including spoiled food, improper storage, and lack of hand washing. Now when they display signs saying how unhealthy the food is, the message won’t just be in jest.