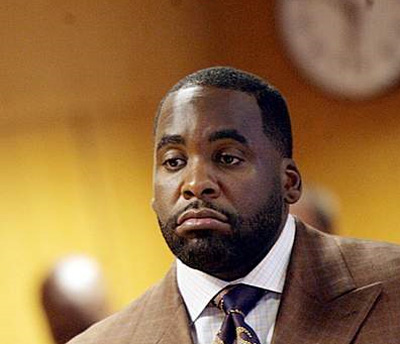 After an extraordinary day that saw him plead guilty to two felonies, Detroit Mayor Kwame Kilpatrick spoke for the first time publicly this evening. Telling Detroiters “I’ve always said that you need to stand strong for the City of Detroit…but sometimes standing strong means stepping down,” Detroit Mayor Kwame Kilpatrick delivered a televised speech that was part-apology, part campaign speech.

“I’m stepping down because the new spirit of this city, the new expectations and standards that we’ve set for excellence in the past six and a half years has been tangled up in what I believe is the pursuit of many people’s own political ambitions, even our governor, Jennifer Granholm, who I wish well,” he said. “Rather than focusing on the huge issues that are facing our state, from the record home foreclosures, the lack of affordable healthcare, a record unemployment in our state, Kwame Kilpatrick was at the top of her list,” he said. “I wish her well and hope that the same tenacity, the same professionalism, if you will, and intensity that went around putting together a quasi-administrative court will also be the same tenacity to solve the problem of the people of the state of Michigan.” 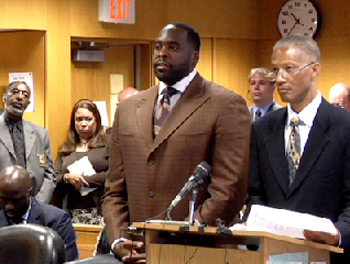 Sentencing will be at 2 p.m. Oct. 28 As part of the deal, Kilpatrick has two weeks to vacate the office of mayor.

Kilpatrick shook hands with Christine Beatty, his former chief of staff and ex-lover. Beatty’s lawyers got Groner to delay her separate criminal case for a week while she tries to hammer out her own plea deal. First Lady Carlita Kilpatrick sat in the audience, a few feet behind her husband, with a stern face throughout the proceedings. It was the first time she had been in a courtroom with Beatty since the scandal started in January. 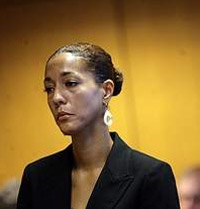