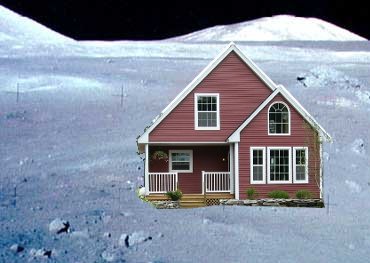 A Nevada man named Dennis Hope started a business back in 1980. Called The Lunar Embassy, it allows you to buy moon property for about $20 an acre.

See, in 1967 the United Nations created something called an “Outer Space Treaty”, which does not allow nation-states to “own” the moon. However, it does not explicitly prohibit individuals or companies from owning property on it, which Hope saw as a nice loophole to take advantage of. And take advantage he did – especially of Hollywood types and other celebrities with more money than they know what to do with. For example, Barbara Walters, George Lucas, and some presidents like Reagan and daddy Bush bought them some moon property. And yes – the Lunar Embassy has made Dennis Hope a multi-millionaire – selling lunar property to people, where the contracts will most likely never be recognized. 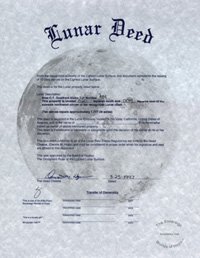 That seems pretty straightforward – you cannot buy moon property. But Hope rejects this argument based on the fact that the moon treaty was never ratified. Countries like the USA, UK, Russia, China, Japan, and India have not signed on.

Dennis Hope has detractors other than governments and scientists – for example: other entrepreneurs who want their own piece of the moonpie, like the Lunar Registry. The arguments given by these guys are a bit confusing – the law says you can’t own lunar property so Dennis Hope cannot sell it, so instead buy from us?

The bottom line is: don’t buy moon property. When colonization begins, the governments of the world will send their military to control it, big corporations will follow, and the little guy will be stuck here on earth. You’ve seen Blade Runner

Source for this story: BBC, Wikipedia