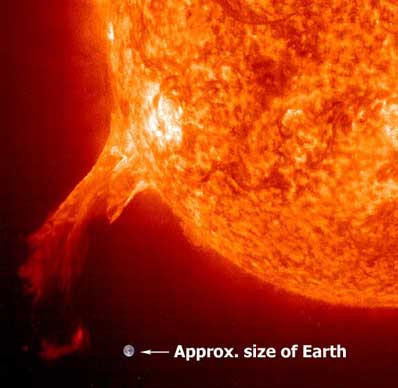 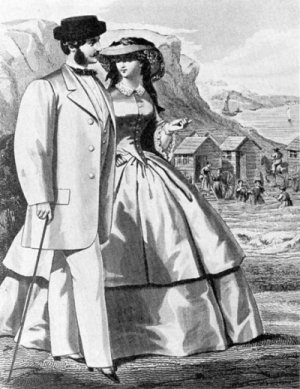 Dear me. I dare say the proton-electron count this day is most uncomfortable, darling.

Where were you on September 2nd, 1859?
Do you remember the aurora caused by the great 1859 solar storm (aka The Carrington Event)? Well, you should remember, old timer.

In scientific circles where solar flares, magnetic storms and other unique solar events are discussed, the occurrences of September 1-2, 1859, are the star stuff of legend. Even 148 years ago, many of Earth’s inhabitants realized something momentous had just occurred. Within hours, telegraph wires in both the United States and Europe spontaneously shorted out, causing numerous fires, while the Northern Lights, solar-induced phenomena more closely associated with regions near Earth’s North Pole, were documented as far south as Rome, Havana and Hawaii, with similar effects at the South Pole.

The 1859 storm was more severe than any encountered during the space age, according to a review of ice core data by Odenwald, and an analysis of geomagnetic data and eyewitness accounts by Dr. Jim Green of NASA Goddard, and his team. “The 1859 storm was the granddaddy of all solar storms – there has been nothing like it since,” said Green. “It disrupted telegraph lines all over the world and generated aurora as far south as Panama. It enthralled the public – news reports were everywhere.”

FACT!
At over 869,919 miles wide, the Sun contains 99.86 percent of the mass of the entire solar system: well over a million Earths could fit inside its bulk.

FACT!
The total energy radiated by the Sun averages 383 billion trillion kilowatts, the equivalent of the energy generated by 100 billion tons of TNT exploding each and every second.

FACT!
Once in a while an event occurs on the surface of the Sun that releases a tremendous amount of energy in the form of a solar flare or a coronal mass ejection, an explosive burst of very hot, electrified gases with a mass that can surpass that of Mount Everest.

In September 1859, a super-duper-extra-large-special of solar flares occurred, sending a super mass of particles towards the earth (93 million miles away) in record time (17 hours, 40 minutes). This was also called The Carrington Event, since the largest flare was seen by British astronomer Richard Carrington.

The earth’s magnetic field was overwhelmed, causing extremely bright aurora and disruptions of electrical systems. According to this article, the giant blast of protons appears to have temporarily weakened Earth’s ozone layer. The huge September 1859 solar flare appears to have gushed 6.5 times the protons of the largest flare seen by modern science, which was in 1989.

Back in 1859 the invention of the telegraph was only 15 years old and society’s electrical framework was just starting out.

“During the aurora of September 2, 1859,” wrote American researcher Elias Loomis (1811-1889), “the currents of electricity on the telegraph wires were so steady and powerful that, on several lines, the operators succeeded in using them for telegraphic purposes as a substitute for the battery.” For a time, messages were transmitted solely on auroral currents.

The auroral current could be used for transmitting and receiving telegraphic dispatches. This was done between 8:30 and 11:00 in the morning, on September 2, 1859, on the wires of the American Telegraph Company between Boston and Portland, and upon the wires of the Old Colony and Fall River Railroad Company between South Braintree and Fall River, among others. The length of time during each positive wave was only, however, 15 to 60 seconds. The following account came from between Boston and Portland.

Boston operator (to Portland operator): “Please cut off your battery [power source] entirely for fifteen minutes.”
Portland operator: “Will do so. It is now disconnected.”
Boston: “Mine is disconnected, and we are working with the auroral current. How do you receive my writing?”
Portland: “Better than with our batteries on. – Current comes and goes gradually.”
Boston: “My current is very strong at times, and we can work better without the batteries, as the aurora seems to neutralize and augment our batteries alternately, making current too strong at times for our relay magnets. Suppose we work without batteries while we are affected by this trouble.”
Portland: “Very well. Shall I go ahead with business?”
Boston: “Yes. Go ahead.”

At which point, the Boston operator began transcribing 19th Century Vintage erotica (ok, just kidding on that one).

The conversation was carried on for around two hours using no battery power at all and working solely with the current induced by the aurora, and it was said that this was the first time on record that more than a word or two was transmitted in such manner. 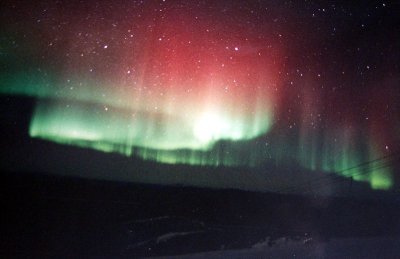