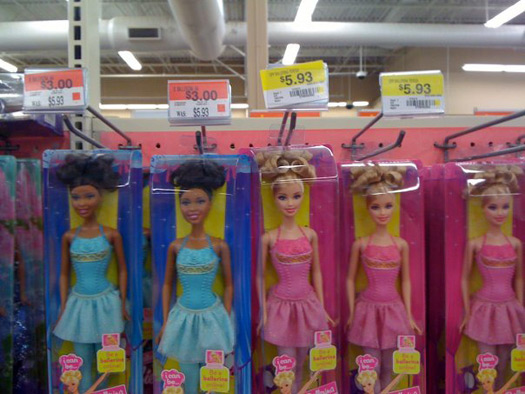 What you are looking at is Mattel’s Ballerina Barbie and Ballerina Theresa dolls hanging side by side at a Louisiana Walmart store. The Theresa dolls (black Barbies) are on sale for $3. The white Barbies are $5.93.

A Walmart spokeswoman said that the price change was because they were trying to clear space for new inventory. “The red price sticker indicates that this particular doll was on clearance; though both dolls were priced the same to start, one was marked down due to its lower sales to hopefully increase purchase from customers.”

Walmart is being criticized over the price difference:

“The implication of the lowering of the price is that’s devaluing the black doll,” said Thelma Dye, the executive director of the Northside Center for Child Development, a Harlem, N.Y. organization founded by psychologists and segregation researchers Kenneth B. Clark and Marnie Phipps Clark. “While it’s clear that’s not what was intended, sometimes these things have collateral damage,” Dye said.

Of course the black doll was “devalued”. That’s because it doesn’t sell as well. Economics, not sociology.

Walmart could have decided “that it’s really important that we as a company don’t send a message that we value blackness less than whiteness,” said Lisa Wade, an assistant sociology professor at Occidental College in Los Angeles. Wade said that when white dolls outsell black dolls, it’s usually because black parents are more likely than white parents to buy their children dolls of a different race. “Most white parents wouldn’t think to buy a black doll for their child, even if they believe in equality and all those things.” Studies show Americans continue to internalize the heirarchical notion that lighter skin tone is considered “better than” darker, Wade said.

Gwen Sharp, a sociology professor at Nevada State College, puts forth the theory that the darker colored dolls simply don’t look like real-life black people, and people buy dolls whose features resemble themselves more closely. “…it seems more real and less symbolic of a change to have a doll that actually presents a range of attractive features rather than ‘Oh we’ve changed the skin tone slightly”

Mattel does have a line of new African American dolls, “So In Style,” featuring dolls with wider cheeks, broader noses and fuller lips. A spokeswoman for Mattel says there has been a good response to the new line. 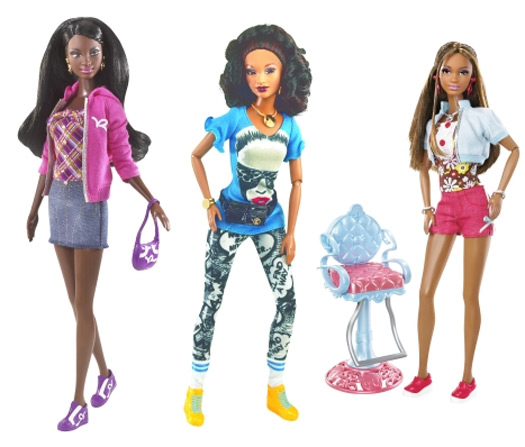 Retail analyst Lori Wachs thinks that Walmart should just keep the prices the same and then eat the loss. “I fully respect retailers rights to mark things down as they see fit but I also think they need to look at the bigger picture. I think there are certain things companies have to be sensitive about and clearly this was one of them.”

Uh, this is Walmart. You must be kidding.