This is what Finnish school shooter Pekka-Eric Auvinen (now deceased) left behind. *Note to readers: the Pekka Eric Auvinen manifesto is printed here for historical purposes. We feel that the document is newsworthy, and may offer some insight into the minds of killers, which hopefully will help to prevent such horrible events in the future. It should go without saying that we do not agree with anything in Auvinen’s manifesto. (More info on the shooting here) 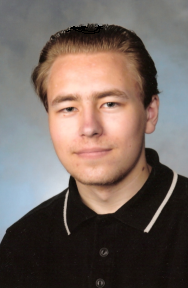 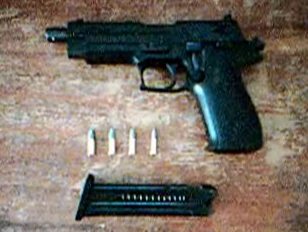 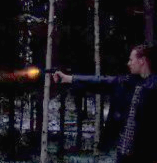 How Did Natural Selection Turn Into Idiocratic Selection?

Today the process of natural selection is totally misguided. It has reversed. Human race has been devolving very long time for now. Retarded and stupid , weak-minded people are reproducing more and faster than the intelligent, strong-minded people. Laws protect the retarded majority which selects the leaders of society. Modern human race has not only betrayed its ancestors, but the future generations too. Homo Sapiens, HAH! It is more like a Homo Idioticus to me! When I look at people I see every day in society, school and everywhere… I can’t say I belong to same race as the lousy, miserable, arrogant, selfish human race! No! I have evolved one step above!

Naturality has been discriminated through religions, ideologies, laws and other mass delusion systems. Individual, who is going through his/hers natural power process and trying to live naturally, but is being told that the way he acts or thinks is wrong and stupid, will usually have some reactions which might be considered as “psychological disorders” by the establishment. In reality they are just natural reactions to the disruption of natural power process. They will have some of the following (depending on individual’s personality): feelings of inferiority / superiority, hostility, aggression, frustration, depression, self-hatred / hatred towards other people, suicidal / homicidal thought etc… and it is completely normal.

Humans are just a species among other animals and world does not exist only for humans. Death and killing is not a tragedy, it happens in nature all the time between all species. Not all human lives are important or worth saving. Only superior (intelligent, self-aware, strong-minded) individuals should survive while inferior (stupid, retarded, weak-minded masses) should perish.

There is also another solution to the problem: stupid people as slaves and intelligent people as free. What I mean is that they who have free minds, are capable of intelligent existential and philosophical thinking and know what justice is, should be free and rulers… and the robotic masses, they can be slaves since they do not mind it now either and because their minds are on so retarded level. The gangsters that now rule societies, would of course get what they deserve.

Of course there is a final solution too: death of entire human race. It would solve every problem of humanity. The faster human race is wiped out from this planet, the better… no one should be left alive. I have no mercy for the scum of earth, the pathetic human race. 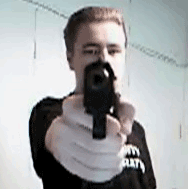 Collective deindividualization is a phenomenon where individual will be trained as part of the mindless herd controlled by state, corporation, church or some other organization, group, ideology, religion or mass delusion system and adopt it’s rules, morality and codes of conduct. This phenomenon has been familiar in all despotic, authoritarian, totalitarian, monarchist, communist, socialist, nazi, fascist and religious societies troughout history. Also, the modern western democratic republics have the same phenomenon. It is just done so that people will think they are free and don’t realize they are being enslaved. Majority of people in society are weak-minded and ignorant retards, masses that act like programmed robots and accept voluntarily slavery. But not me! I am self-aware and realize what is going on in society! I have a free mind! And I choose to be free rather than live like a robot or slave. You can say I have a “god complex”, sure… then you have a “group complex”! Compared to you retarded masses, I am actually godlike.

Totalitarian governments rule people through education system, consumerism, mass media, monopoly on the legitimate use of physical force (police, military) and laws discriminating people who think differently than the majority. Democracy… you think democracy means freedom and justice? You are wrong. Democracy is a dictatorship of the moral majority… and the majority is manipulated and ruled by the state mafia. Modern western democracy has nothing to do with freedom or justice; it is totalitarian and corrupted system. Laws are made over the heads of the people and people are being brainwashed to support the system and connected to the institutional structures immediately after their birth. Societies are being ruled by manipulative and charismatic politicians who only care about the interests of majority, and who do not base their decisions on reason but emotions and feelings of the masses. These masses let the authorities of state to make all the important decisions for them. The masses will get an education, they study, get a job, go to work and vote in elections. They think they are free and don’t criticise or question the system. They have become robots. It is like a constructed mechanism in mind, that leaves little choice for an individual to think, talk and act independently. 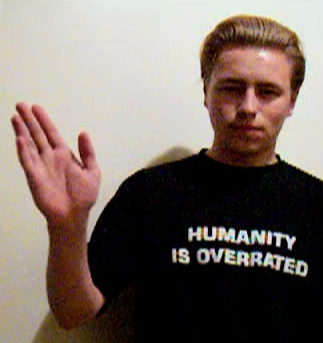 There are three kinds of human personality types in this world:

Another way how to divide people is bit different but is based on the same facts, human nature and history. The division is based on the level of intelligence and quality of mentality:

Hate, Im so full of it and I love it. That is one thing I really love. Some time ago, I used to believe in humanity and I wanted to live a long and happy life… but then I woke up. I started to think deeper and realized things. But it was not easy to become existential… knowing as much as I know has made me unhappy, frustrated and angry. I just can’t be happy in the society or the reality I live. Due to long process of existential thinking, observing the society I live and some other things happened in my life… I have come to the point where I feel nothing but hate against humanity and human race.

Life is just a meaningless coincidence… result of long process of evolution and many several factors, causes and effects. However, life is also something that an individual wants and determines it to be. And I’m the dictator and god of my own life. And me, I have chosen my way. I am prepared to fight and die for my cause. I, as a natural selector, will eliminate all who I see unfit, disgraces of human race and failures of natural selection.

You might ask yourselves, why did I do this and what do I want. Well, most of you are too arrogant and closed-minded to understand… You will proprably say me that I am “insane”, “crazy”, “psychopath”, “criminal” or crap like that. No, the truth is that I am just an animl, a human, an individual, a dissident.

I have had enough. I don’t want to be part of this f*cked up society. Like some other wise people have said in the past, human race is not worth fighting for or saving… only worth killing. But… When my enemies will run and hide in fear when mentioning my name… When the gangsters of the corrupted governments have been shot in the streets… When the rule of idioracy and the democratic system has been replaced with justice… When intelligent people are finally free and rule the society instead of the idiocratic rule of majority… In that great day of deliverance, you will know what I want.

Long live the revolution… revolution against the system, which enslaves not only the majority of weak-minded masses but also the small minority of strong-minded and intelligent individuals! If we want to live in a different world, we must act. We must rise against the enslaving, corrupted and totalitarian regimes and overthrow the tyrants, gangsters and the rule of idiocracy. I can’t alone change much but hopefully my actions will inspire all the intelligent people of the world and start some sort of revolution against the current systems. The system discriminating naturality and justice, is my enemy. The people living in the world of delusion and supporting this system are my enemies.

I am ready to die for a cause I know is right, just and true… even if I would lose or the battle would be only remembered as evil… I will rather fight and die than live a long and unhappy life.

And remember that this is my war, my ideas and my plans. Don’t blame anyone else for my actions than myself. Don’t blame my parents or my friends. I told nobody about my plans and I always kept them inside my mind only. Don’t blame the movies I see, the music I hear, the games I play or the books I read. No, they had nothing to do with this. This is my war: one man war against humanity, governments and weak-minded masses of the world! No mercy for the scum of the earth! HUMANITY IS OVERRATED! It’s time to put NATURAL SELECTION & SURVIVAL OF THE FITTEST back on tracks!

Humanity is Overrated
Justice renders to everyone his due.

Note: Comments on this article are now closed.