Michelle Duggar has suffered a miscarriage.

Well, it seems that “baby factory” Michelle Duggar is, once again, pregnant with her 20th child. Yes, that’s kid #20. Michelle and her husband Jim Bob announced on the Today show that they are expecting. Concerns are raised that this might affect Michelle Duggar’s health. Which prompts us to ask: why worry about that now? Shouldn’t you have worried about it 5 or 10 kids ago?

“There’s no information out there about somebody having this many babies. That, I think, makes us nervous,” says Dr. George Macones, chair of obstetrics and gynecology at Washington University in St. Louis. Dr. Nancy Snyderman, NBC’s chief medical editor, said “She’s a high-risk pregnancy because she’s 45, and because that uterus can’t have any spring in it anymore. I mean, really, it’s gotta be like a water balloon that has no tensile strength.”

Nice image. the MSNBC story says that Michelle had problems with her 19th child, Josie – she had preeclampsia and Josie had to be delivered 3.5 months early.

Obviously, their show 19 Kids and Counting

will have to change the name.

Below you’ll find our previous stories about Michelle Duggar, or “the clown car” as we sometimes call her. (we kid, we kid)

Well, here it is folks. Another year, another bun in the oven for baby factory Michelle Duggar, married to Jim Bob Duggar, who together already have 18 kids.

Here’s the scoop from People:

Jim Bob and Michelle Duggar of Tonitown, Ark., who have 18 children and one grandchild on the way, are expecting a new addition to their household – baby No. 19 will arrive in the spring. “We are so thrilled,” says Michelle, 42. “We just couldn’t believe it is happening.” Jim Bob, 44, agrees: “This never gets old. We are so grateful for each child. We are looking forward to our first grand baby and our 19th child.”

So it never gets old, huh?

Oldest son Joshua, 21 and his wife Anna, 21, are expecting daughter Mackynzie Renée next month, so she will be older than her new aunt or uncle. “I think it is going to be awesome, it is going to be great,” says Josh about the news that his parents are expecting. “We have been looking forward to the arrival of my little girl and to now get to celebrate for my parents, it’s a wonderful thing.”

Noooo! It’s gonna start all over again! As a commenter on HuffPo said, all these kids are home schooled and destined to marry themselves off by the time they are 18-21. 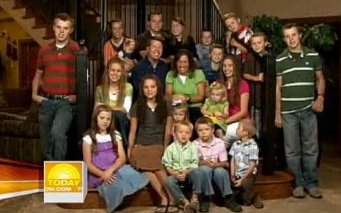 Thanks for that bit of info, doc. We were all wondering how the uterus was doing. 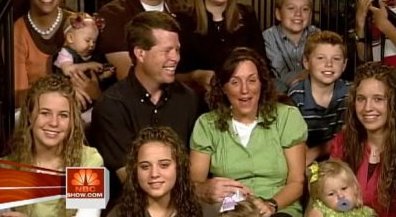 Michelle Duggar, 41, is due on New Year’s Day, and the latest addition will join seven sisters and 10 brothers.

The fast-growing family lives in Tontitown in northwest Arkansas in a 7,000-square-foot home. All the children — whose names start with the letter J — are home-schooled. Duggar has been been pregnant for more than 11 years of her life.

The family is in the process of filming another series for Discovery Health. The new show looks at life inside the Duggar home, where chores — or “jurisdictions” — are assigned to each child. One episode of the new show involves a “jurisdiction swap,” where the boys do chores traditionally assigned to the girls, and vice versa, Duggar said.

Duggar said she and her husband, Jim Bob Duggar, will keep having children as long as God wills it.