Some crate digging turned up a nice vinyl of Fire

by the Ohio Players. The dust jacket holding the vinyl had an interesting informational “bulletin” about the rise of tape piracy. Just in case you old skoolers out there are thinking of cassette piracy, remember that the year is 1974. While the compact cassette was already in use, the audio quality was only just starting to catch up with 8 track tapes. The cassette wouldn’t hit the big time until later in the decade, so this 1974 informational message is talking about 8 track tape piracy. (We didn’t even know there was such a thing!) 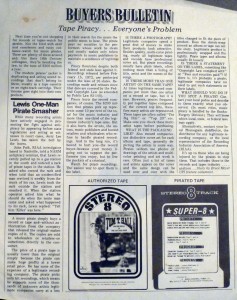 We chuckle at the Jerry Lee Lewis story:

Lewis recently pulled up to a gas station in the south and noticed a rack of pirate tapes in the station. He asked who owned the rack and when told that an unidentified man serviced it weekly from the trunk of his car, Lewis took the rack outside the station and smashed it. When the station operator asked him what he should do when the route man came and asked what happened to his rack, Lewis replied: “Tell him ‘Killer’ was here.”

We also had a laugh at the statement: “Piracy flourishes despite both federal and state laws against it.” It almost sounds like the author is being incredulous, as if he is surprised that there are those who choose not to obey the law. While we agree that piracy hurts record companies and artists, we have a hard time feeling bad for the record companies, but that’s an argument for another day.

The rest of the bulletin talks about how to properly spot an 8 track pirate tape. So if your 8 track tape lacks cover art or has a no-frills label featuring different artists, it might be a pirate copy! Report it immediately!