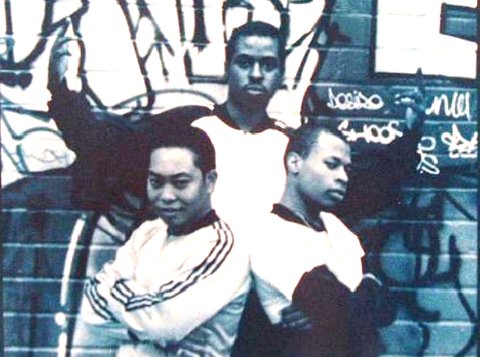 David Hobbs (aka DJ Mr. Mixx) teamed up with Chris Wong Won (aka Fresh Kid Ice) and Yuri Vielot (Amazing V) in 1984 to release their first single on vinyl through Fresh Beat Records/Macola Records, out of Hollywood, Cali. The trio were Air Force veterans living in Riverside, a suburb of Los Angeles. Revelation is a proto-bass, electro record with positive-leaning, old-school lyrics. For example:

See, I remember back in Brooklyn, when I was a child
Actin wild, cause that was the stlye
But as I grew older, I learned the deal
Because my old lady told me, “Son, be for real
You have a chance to be an architect or scientist
So why do you choose to be like this?”
You have to get yourself together before it’s too late
It’s up to you to be a bum or someone great

Listen to The Revelation, with rap by Amazing V:

The flip side, 2 Live, shows off Hobbs’ 808 programming and scratching skills while Fresh Kid Ice raps.

Right away you can hear the makings of the 2 Live/Miami sound. Not surprisingly, this record was a hit in south Florida, prompting Miami promoter Luther Campbell (aka Luke Skyywalker) to book the group for shows.

In 1985, the group released another single on Fresh Beat/Macola, called What I Like, which is filled with more electro influences and, um, cowbell:

In 1986, Yuri Vielot decided to leave the group, so he was replaced with Mark Ross, aka Brother Marquis. Ross was also a friend of Hobbs’ from Riverside. Now living in Miami, the group created a new single which took them in a raunchy new direction. The single was called Throw The ‘D’

Unable to find labels who would release the song, Campbell founded Skyywalker Records and released it himself. The single sold over 200,000 copies. In late 1986, Campbell officially joined the 2 Live Crew as its manager and frontman. 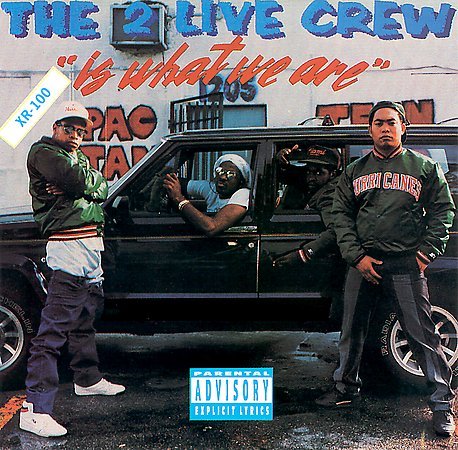 With obvious nods to Blowfly

was equal parts Miami-bass instrumentals and X-rated party records, the most infamous being We Want Some Pussy, which showcased adult lyrics and rock guitar. It also layed down the “2 Live” template – dirty lyrics from Fresh Kid Ice and Brother Marquis, production/turntable work from Mr. Mixx, and the chorus/cat-call from head cheerleader Luke Skyywalker. The album was an underground hit in Florida, and even though it was little known outside the southeast, it had already started getting attention from the authorities. In 1987, for example, a Florida store clerk was charged with a felony for selling the cassette to a 14 year old girl (he was acquitted).

, which was even more popular than the first album. Move Somethin came out of the gate with no intentions of being discreet – the album cover features all four 2 Live members sitting clothed in a hot tub, wearing gold chains, and ogling a woman standing up facing them, while her backside faces us. Campbell had made the decision to sell 2 versions of the album – one clean and one explicit. Savvy high schoolers, however, knew where to go to find a clerk who would willingly sell them the explicit version. That year, a clerk in Alexander City, Alabama named Tommy Hammond sold the album to an undercover cop and was charged with selling obscene material. He appealed his conviction and was acquitted, the jurors not being fans of the government telling them what to listen to.

Move Somethin’ was certified Gold, reaching #68 on the Billboard 200 and #20 on the Top R&B/Hip Hop chart. The album is filled with samples from a wide variety of musical genres, including Manfred Mann, James Brown, The Kinks, Kraftwerk, Queen, and Yellow Magic Orchestra. It’s all glued together by a heavy Miami-bass sound and adult lyrical content.

As Nasty As They Wanna Be

), and ultimately led to a huge obscenity debate. During and after the controversy, which also included Campbell being sued by George Lucas, there would be other 2 Live albums, but none of them would be as commercially successful.