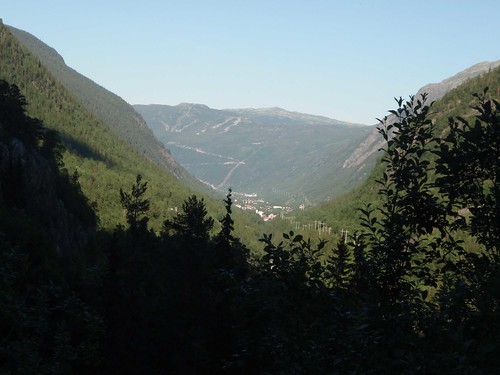 Can you imagine living for five whole months without any direct sunlight? What if this repeats year after year for your entire life? This is how the 3,500 Norwegian residents of Rjukan live every winter.  Rjukan is situated at the base of a valley surrounded by high mountains which blocks the winter sun.

The city is located deep in the floor of a valley in the Telemark County. Where the winter sun in the rugged region moves low across the sky. As the sun struggles to rise high enough to be visible over the mountains, Rjukan suffers from no direct sunlight from September up to March.

However, now there will be one cheery place in the sunless town that all the residents can enjoy. Using giant mirrors placed on the mountains, the town square will be now lighted during all these dark months as never before. Helicopters were used to deliver three huge mirrors to their destinations on the highest peaks of the surrounding mountains which reflect light back into the valley. The captured sunlight beams onto the town square circle – 2,000 square feet of surface area. Locals have turned this area into a big ice skating rink. Obviously, the light will not bring too much heat to cause melting, but people will enjoy sunlight like never before.

The whole projects costs $835,000 and is highly technological. A special computer located in the town hall will monitor the sun movement and will direct the mirrors in the right position, adjusting them to the best angle. Both the solar and wind power are used for this “Mirror project”. The mirrors are heliostatic and are usually used in solar farms. They are positioned about 1500 feet above the town and are specially designed to track the sun’s movement and to direct the caught sunlight down to the main square of the city.

The idea of placing mirrors to direct sunlight to this sunless town is not new. About 100 years ago, the founder of the nearby hydroelectric plant has had the same intention, but he couldn’t carry out the project because of the limited technology in those days. All he could do was to construct a cable car that leads up the mountains. This cable car is still used by sun-starved locals as it allows them to catch some of the winter rays on the mountain top.

Today the dreams of sunless people come true and gloomy Rjukan will get its very first winter rays. The town square will be transformed into the favorite place for gatherings and socialization, a sunny meeting place without shadows. The mirrors will be able to reflect from 80% to 100% of the direct sunlight, which is a pretty good result.

The efficiency of the project is going to be tested starting from September, when the sun begins to disappear behind the mountains. If all works properly, the city will continue to enjoy the sun rays just like during the summer months, although located in one place. Some think that this idea is crazy, others find it funny, but the most important thing is that it changes people’s life.

A similar mirror project was carried out in northern Italy in 2006. The small village of Viganella had the same problem as the residents of Rjukan, but was also able to resolve this issue successfully setting up giant mirrors on the mountain tops.

A Norwegian delegation visited this Italian village and was impressed by the way this project changed people’s life. They decided to make the same for their local people, but the project costs a lot of money. Rjukan town council debated for five years before taking the decision to invest the required amount into this project. Now all people of the sunless town hope that this project will revitalize them during the long winters.